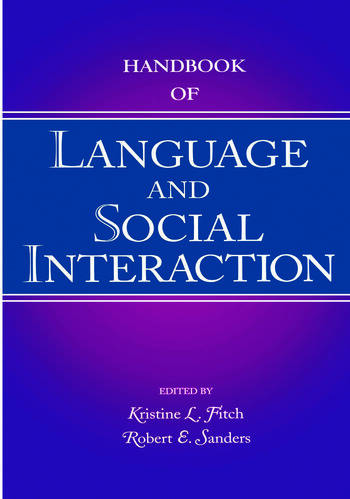 Handbook of Language and Social Interaction

This Handbook stands as the premier scholarly resource for Language and Social Interaction (LSI) subject matter and research, giving visibility and definition to this area of study and establishing a benchmark for the current state of scholarship. The Handbook identifies the five main subdisciplinary areas that make up LSI--language pragmatics, conversation analysis, language and social psychology, discourse analysis, and the ethnography of communication. One section of the volume is devoted to each area, providing a forum for a variety of authoritative voices to provide their respective views on the central concerns, research programs, and main findings of each area, and to articulate the present or emergent issues and directions. A sixth section addresses LSI in the context of broadcast media and the Internet.  This volume's distinguished authors and original content contribute significantly to the advancement of LSI scholarship, circumscribing and clarifying the interrelationships among the questions, findings, and methods across LSI's subdisciplinary areas. Readers will come away richer in their understanding of the variety and depth of ways the intricacies of language and social interaction are revealed.  As an essential scholarly resource, this Handbook is required reading for scholars, researchers, and graduate students in language and social interaction, and it is destined to have a broad influence on future LSI study and research.

"The handbook provides a good examination of current issues in LSI....The sections are arranged in an order that reflects, from least to most, the relative importance each subfield attaches to factors beyond the content of talk itself. Recommended."

Handbook of Language and Social Interaction