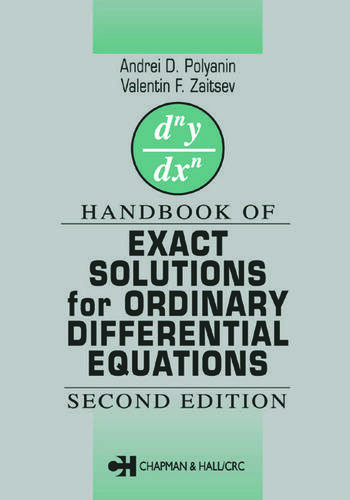 Exact solutions of differential equations continue to play an important role in the understanding of many phenomena and processes throughout the natural sciences in that they can verify the correctness of or estimate errors in solutions reached by numerical, asymptotic, and approximate analytical methods. The new edition of this bestselling handbook now contains the exact solutions to more than 6200 ordinary differential equations. The authors have made significant enhancements to this edition, including:

"…I have been reading the Polyanin books "Handbook of Linear Partial Differential Equations for Engineers and Scientists" and "Handbook of Exact Solutions for Ordinary Differential Equations". I think these books are extraordinary, and are destined to become classics … CRC Press has provided an invaluable service to science and engineering by publishing these books."
- William Schiesser, Lehigh University

"In summary, this is a very useful and easy-to-read handbook for anyone involved in ordinary differential equations..."
- SIAM Review, 1997, on the first edition

"This best-selling handbook ... is now in its second edition and has been substantially updated and improved ... book is highly recommended for mathematicians, scientists, and
engineers. It would be a useful edition to academic sci-tech libraries, including those that already have the first edition."
- Holly Flynn in E-STREAM