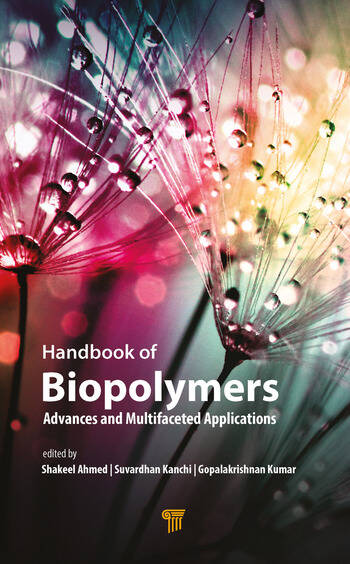 Biopolymers have the potential to cut carbon emissions and reduce carbon dioxide in the atmosphere. The carbon dioxide released when they degrade can be reabsorbed by plants, which makes them close to carbon neutral. Biopolymers are biodegradable and some are compostable, too. This book presents key topics on biopolymers, including their synthesis, characterization, and physiochemical properties, and discusses their applications in key areas such as biomedicine, agriculture, and environmental engineering. It will serve as an in-depth reference for the biopolymer industry—material suppliers and processors, producers, and fabricators—and engineers and scientists who are designing biopolymers or evaluating options for switching from traditional plastics to biopolymers.

2. Bio-Based Biopolymers and Their Potential Applications for Bio- and Non-Bio Sectors.

3. 3D Printing of Biopolymers: Trends and Opportunities for Medical Applications.

4. Proteins and Their Novel Applications.

5. Chitin and Chitosan: The Defence Booster in Agricultural Field.

8. Bacterial Cellulose and Its Applications.

10. Eggshells: From Waste to Medical Applications.

11. Production of Tamarind Products and Polysaccharide.

is assistant professor at the Department of Chemistry, Government Degree College Mendhar, Jammu and Kashmir, India. His research focuses on biopolymeric and green nanomaterials, and he has authored several articles on their various applications in the fields of biomedicine, packaging, sensors, and water treatment. He has also authored a few books in the area of natural materials, including biopolymers, biocomposites, and nanomaterials. He is a member of the American Chemical Society, USA, and the Royal Society of Chemistry, UK, and a life member of the Asian Polymer Association and the Society of Materials Chemistry, India.

Suvardhan Kanchi is research scientist at Durban University of Technology, South Africa. His research focuses on the synthesis of smart materials for device applications. He is also interested in designing smartphone-based sensing devices. Additionally, green nanotechnology is part of his research, utilizing plant extracts to synthesize metal and metal oxide nanoparticles for application in electrochemical nano-/biosensors and nanodiagnostics. Dr. Kanchi is keen to develop a synergy between experimental and computational methods. He has published 40 papers in international journals and 15 book chapters and edited 8 books.

Gopalakrishnan Kumar is associate professor at the Institute of Chemistry, Bioscience and Environmental Engineering, Faculty of Science and Technology, University of Stavanger, Norway, and adjunct professor and head of the Green Processing, Bioremediation and Alternative Energies Group at Ton Duc Thang University, Vietnam. He is a recipient of the JSPS Postdoctoral Fellowship (Japan) and the Emilio Rosenblueth Fellowship (Mexico). Prof. Kumar is visiting faculty at several universities in Europe, India, Vietnam, China, and Turkey and has published more than 150 SCI papers in highly prestigious journals.