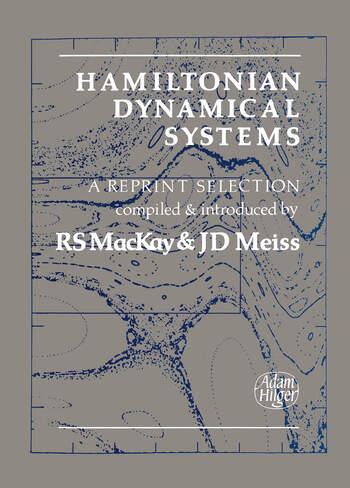 Classical mechanics is a subject that is teeming with life. However, most of the interesting results are scattered around in the specialist literature, which means that potential readers may be somewhat discouraged by the effort required to obtain them. Addressing this situation, Hamiltonian Dynamical Systems includes some of the most significant papers in Hamiltonian dynamics published during the last 60 years. The book covers bifurcation of periodic orbits, the break-up of invariant tori, chaotic behavior in hyperbolic systems, and the intricacies of real systems that contain coexisting order and chaos. It begins with an introductory survey of the subjects to help readers appreciate the underlying themes that unite an apparently diverse collection of articles. The book concludes with a selection of papers on applications, including in celestial mechanics, plasma physics, chemistry, accelerator physics, fluid mechanics, and solid state mechanics, and contains an extensive bibliography. The book provides a worthy introduction to the subject for anyone with an undergraduate background in physics or mathematics, and an indispensable reference work for researchers and graduate students interested in any aspect of classical mechanics.

INTRODUCTION
Survey of Hamiltonian dynamics by R.S. MacKay and J.D. Meiss. Is the solar system stable? by J.K. Moser. Regular and irregular motion by M.V. Berry. The mechanisms of stochasticity in classical dynamical series by A.S. Wightman.

QUASIPERIODIC ORBITS
Geodesics on a two-dimensional Riemannian manifold with periodic coefficients by G.A. Hedlund. Small denominators and problems of stability of motion in classical and celestial mechanics by V.I. Arnold. Variational principles for invariant tori and cantori by I.C. Percival. Periodic and quasiperiodic orbits for twist maps by A. Katok. Non-existence of invariant circles by J.N. Mather.

CHAOTIC BEHAVIOR
Roughness of geodesic flows on compact Riemannian manifolds of negative curvature by D.V. Anosov. Ergodic properties of geodesic flows on closed Riemannian manifolds of negative curvature by D.V. Anosov. Markov partitions and Y-diffeomorphisms by Ya G. Sinai. Lyapunov characteristic exponents and ergodic properties of smooth dynamical systems by Ya B. Pesin. Ergodicity of linked twist maps by R. Burton and R.W. Easton. Principles for the design of billiards with nonvanishing Lyapunov exponents by M. Wojtkowski. Shift automorphisms in the Henon mapping by R. Devaney and Z. Nitecki.

MIXED SYSTEMS
A model problem with the coexistence of stochastic and integrable behavior by M. Wojtkowski. Fat fractals on the energy surface by D.K. Umberger and J.D. Farmer. Long time correlations in the stochastic regime by C.F.F. Karney. Transport in Hamiltonian systems by R.S. MacKay, J.D. Meiss, and I.C. Percival. Instability of dynamical systems with several degrees of freedom by V.I. Arnold. Behavior of Hamiltonian systems close to integrable by N.N. Nekhoroshev. Melnikov's method and Arnold diffusion for perturbations of integrable Hamiltonian systems by P.J. Holmes and J.E. Marsden. Arnold diffusion, ergodicity and intermittency in a coupled standard mapping by K. Kaneko and R.J. Bagley.

APPLICATIONS
Nature of the Kirkwood gaps in the asteroid belt by S.F. Dermott and C.D. Murray. The chaotic rotation of Hyperion by J. Wisdom, S. Peale, and F. Mignard. A method for mapping a toroidal magnetic field by storage of phase stabilised electrons by R.M. Sinclair, J.C. Hosea, and G.V. Sheffield. Electron heat transport in a tokomak with destroyed magnetic surfaces by A.B. Rechester and M.N. Rosenbluth. Elimination of stochasticity in stellerators by J.D. Hanson and J.R. Cary. The dynamics of the beam-beam interaction by A. Gerasimov, F.M. Israilev, J.L. Tennyson, and A.B. Temnykh. Intramolecular dynamics and nonlinear mechanics of model OCS by D. Carter and P. Brummer. Stirring by chaotic advection by H. Aref. The twist map, the extended Frenkel-Kontorova model, and the devil's staircase by S. Aubry.