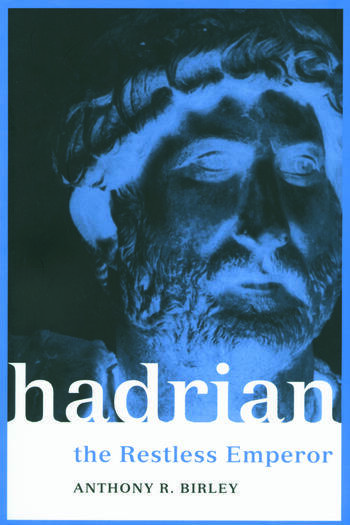 Hadrian's reign (AD 117-138) was a watershed in the history of the Roman Empire. Hadrian abandoned his predecessor Trajan's eastern conquests - Mesopotamia and Armenia - trimmed down the lands beyond the lower Danube, and constructed new demarcation lines in Germany, North Africa, and most famously Hadrian's Wall in Britain, to delimit the empire.
The emperor Hadrian, a strange and baffling figure to his contemporaries, had a many-sided personality. Insatiably ambitious, and a passionate Philhellene, he promoted the 'Greek Renaissance' extravagantly. But his attempt to Hellenize the Jews, including the outlawing of circumcision, had disastrous consequences, and his 'Greek' love of the beautiful Bithynian boy Antinous ended in tragedy.
No comprehensive account of Hadrian's life and reign has been attempted for over seventy years. In Hadrian: The Restless Emperor, Anthony Birley brings together the new evidence from inscriptions and papyri, and up-to-date and in-depth examination of the work of other scholars on aspects of Hadrian's reign and policies such as the Jewish war, the coinage, Hadrian's building programme in Rome, Athens and Tivoli, and his relationship with his favourite, Antinous, to provide a thorough and fascinating account of the private and public life of a man who, though hated when he died, left an indelible mark on the Roman Empire.

'Birley has certainly done [Hadrian] justice in this finely detailed, scholarly and closely argued biography ... This is a superb addition to the excellent Routledge series of imperial biographies.' - Peter Jones, Literary Review

'Birley is scrupulous. His grasp of epigraphy and numismatics, his diligence in flowing the vestiges of imperial travel, and his patent sense of fairness in evaluating the scappy ancient literature on Hadrian enable him to construct a narrative of the Emperor's life which renders all previous efforts obsolescent.' - Nigel Spivey, Times Literary Supplement

'Birley's book is essential for the Hadrian researcher.' - Gay Times

'An excellent, and long overdue, biography ofone of the greatest amd most accomplished of the Roman emperors.' - Kirkus Reviews

'Elegantly decked out with coin portraits, photographs, sculptures and maps, this readable bio will appeal to history buffs' - Publishers weekly

'Mr Birley is an excellent guide to the facts of Hadrian's career, and of the careers of many of his contemporaries' - Jasper Griffin, The Spectator 1997

'This book is well worth the price both to read and as a work of reference. It contains useful photographs, details abour coins, bibliography and index, and also contains excellent maps.' - Gay and Lesbian Humanist

'Birley brings this cipher to life with gusto, Hadrian's childhood and early career, his imperial reign and subsequent travels through every corner of his empire, step by step, stone by stone, until the redaer, too, is exhausted by Hadrian's (and Birley's) seemingly irrepressible energy' - Josephine Balmer, New Statesman and Society

"...This is a historical work that must rank amongst the most important biographies of the Roman emperors; it deserves to be read as much for its account of Hadrian's restless travelling through the provinces as for its analysis of policies and matters of state." - British Archaelogy

'Birley has now produced a volume rich in detail, imaginative in interpretation, sane and sensible in judgement. ...This is an extremely learned book, often challenging.' - The Classical Outlook/Fall 1998