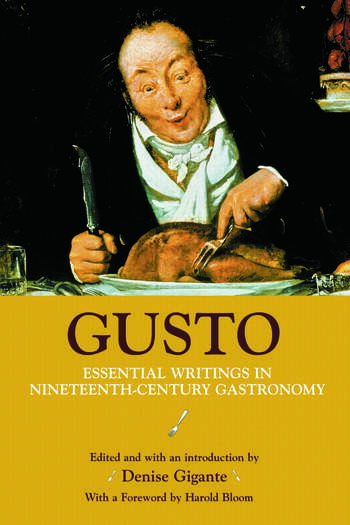 First published in 2006. Routledge is an imprint of Taylor & Francis, an informa company.

Denise Gigante is Assistant Professor in the Department of English at Stanford. She is the author of Taste: A Literary History.

"Gusto is a feast! A brilliant anthology of those 19th-century texts that made of cuisine a pursuit not merely sensual, but literary and intellectual. Gusto is delightful, delicious, decidedly essential reading." -- Allen S. Weiss, author of Feast and Folly and co-editor of French Food
"'The Revolution,' writes Dumas, 'which destroyed so many things, created new restaurant keepers'--as well as a new vocabulary of desire, whose insatiable rhetorical appetites are laid on the carefully set historical table as never before by Gigante's gathering, where they are seen to feed the whole Romantic culture of gusto. This is a striking scholarly contribution--and a kick to read." -- Garrett Stewart, author of Dear Reader: The Conscripted Audience in Nineteenth-Century British Fiction
"In these delectable selections from the history of food writing, we learn to savor a radically new account of the senses. This collection will change our understanding not just of 19th-century culture, but of our own daily bread." -- Leah Price, author of The Anthology and the Rise of the Novel
"The wonderful gastronomical texts assembled here delight and surprise in equal measure. Selections from Brillat-Savarin, Alexandre Dumas (père) and an especially welcome translation from the pioneering journalism of Grimod de la Reynière represent the French. But the big surprise lies across the Channel. Denise Gigante makes a truly original contribution with her promotion of English gastronomers such as Launcelot Sturgeon, Dick Humlbergius Secundus, and The Alderman (all pseudonyms), Charles Lamb and Thackeray. Successors to the French, the English gastronomers come into their own as descendants of the Enlightenment writers on taste." -- Priscilla Parkhurst Ferguson, author of Accounting for Taste
"Informative and witty, these essays demonstrate the application of science, philosophy, and medicine to the developing culture of gastronomy. Denise Gigante has assembled the writings of the founders of modern ideas about eating, taste, and manners, framing robust selections with illuminating and authoritative scholarship." -- Carolyn Korsmeyer, author of Making Sense of Taste