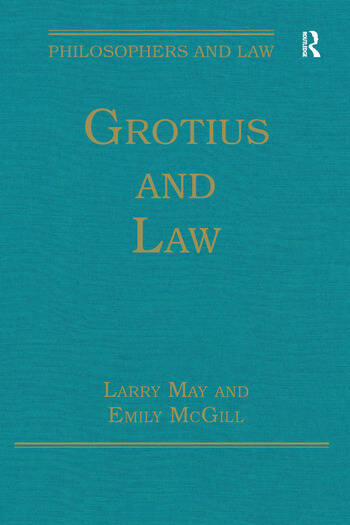 The essays collected for this volume represent the best scholarly literature on Hugo Grotius available in the English language. In the English speaking world Grotius is not as well known as his fellow 17th century political philosophers, Thomas Hobbes or John Locke, but in legal theory Grotius is at least as important. Even on central political concepts such as liberty and property, Grotius has important views that should be explored by anyone working in legal and political philosophy. And Grotius’s work, especially De Jure Belli ac Pacis, is much more important in international law and the laws of war than anyone else’s work in the 17th or 18th centuries. This volume is therefore useful not only to Grotius scholars, but also to anyone interested in historical and modern debates on key issues in political and legal philosophy more broadly, and international law in particular.

Larry May is W. Alton Jones Professor of Philosophy, Professor of Law, and Professor of Political Science, at Vanderbilt University. He has published twelve authored monographs and seventeen edited books. His books have won multiple awards in law, philosophy, and international relations. In the last five years there have been four conferences in Europe concerning his work, the most recent in St. Andrews, UK. Emily McGill is a graduate student in Philosophy at Vanderbilt University. She works primarily in social-political philosophy and ethics, and is currently writing a dissertation on relational autonomy and feminism.