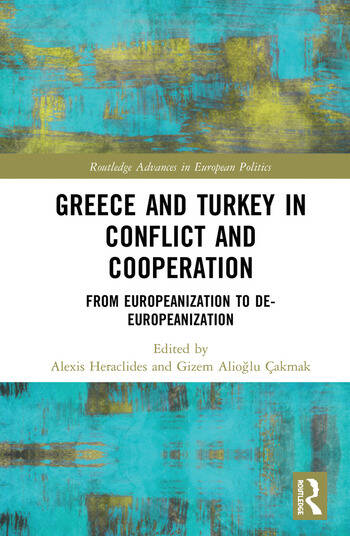 This book offers a sober, contemplative and comprehensive coverage of Greek–Turkish relations, covering in depth the current political climate, with due regard to the historical dimension.

The book includes up-to-date accounts of the traditional areas of unresolved discord (Aegean, minorities, Cyprus, the Patriarchate), with emphasis on why they remain contentious, despite the thaw in Greek–Turkish relations from 1999 until recently. It also covers new topics and challenges that have led to cooperation as well as friction, such as unprecedented economic cooperation, energy resources, or the refugee crisis. Furthermore, the volume deals with the ‘Europeanization’ of Greek–Turkish relations and other facilitating factors as they appeared in the first decade of the 21st century (including the role of civil society) as well as the contrary, ‘de-Europeanization’ from the 2010 onwards, which presages a hazardous downward trend in their relations, often not helped by the media in both countries, which is also examined.

This volume will be essential reading to scholars and students of Greek–Turkish relations, more generally Greece and Turkey, and more broadly to the study of South European Politics, European Union politics, security studies and International Relations.

Part I: International Theory and Perceptions/Misperceptions

1. Back to the Future: Institutionalist International Relations Theories and Greek–Turkish Relations [Bahar Rumelili]

2. The Greek–Turkish Antagonism: The Social Construction of Self and Other [Alexis Heraclides]

5. Greek and Turkish Reciprocal Minorities: A Silenced Dispute at the Border Zone of Democracy [Meriç Özgüneş and Konstantinos Tsitselikis]

8. The European Union and the Turkish–Greek Rapprochement in 2000s: From Europeanization to De-Europeanization? [Gizem Alioğlu Çakmak]

9. Accessing the Rapprochement in its Second Decade: A Critical Approach to the Official Discourse between Turkey and Greece [Selin Türkeş-Kılıç]

12. Turkey and the Greek Media: The Need for a Shift from Confrontational – to Peace Oriented Journalism [Christos A. Frangonikolopoulos]

13. From Pioneers of Peace to Facilitators of Cooperation? Civil Society in Turkish–Greek Relations [Leonidas Karakatsanis]

Alexis Heraclides is Professor of International Relations and Conflict Resolution at the Panteion University of Social and Political Sciences, Greece.