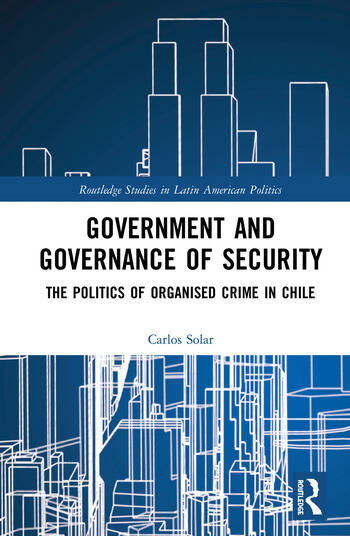 Government and Governance of Security: The Politics of Organised Crime in Chile

At a time when Latin America is experiencing societal unrest from human rights violations, corruption and weak institutions Government and Governance of Security offers an insightful understanding for the modern steering of crime policies. Using Chile as a case study, the book delivers an untold account of the trade-offs between political, judicial and policing institutions put in practice to confront organised crime since the country’s redemocratisation.

In an effort to encompass the academic fields of political science, public policy and criminology, Carlos Solar challenges the current orthodoxies for understanding security and the promotion of the rule of law in developing states. His research aptly illuminates the practicalities of present-day governance and investigates how networks of institutions are formed and sustained across time and, subsequently, how these actors deal with issues of policy consensus and cooperation. To unveil the uniqueness of this on-the-ground action, the analysis is based on an extensive revision of public documents, legislation, media accounts and interviews conducted by the author with the key policy makers and officials dealing with crimes including drug-trafficking, money laundering and human smuggling.

of Security will be of interest to scholars of Latin American studies, security and governance and development.

1. Security and Organised Crime: An Introduction

Part III: The Governance of Security

Carlos Solar is a British Academy Postdoctoral Fellow at the Latin American Centre in the University of Oxford. He has published in the Journal of Strategic Studies, International Politics, Global Crime, Latin American Policy, Democracy and Security and Mexican Studies.

"Government and Governance of Security will not only be essential reading for scholars of Latin American security policy. It also makes excellent instructional material for teachers of courses on qualitative methods that are looking for a well-crafted case study that combines broad historical narrative with micro-case studies of individual events within a coherent account of institutional change."—David Kuehn, Democratization

'Solar’s book is a nuanced and theoretically rich analysis of a regional problem that affects even stable democracies like Chile. The historical institutional approach provides a fascinating view of how Chilean political institutions developed and responded in the postauthoritarian era. His framework for understanding governance can be usefully applied to other cases, as can his policy recommendations for all states fighting organized crime.'—Gregory Weeks, University of North Carolina at Charlotte

'Carlos Solar has produced an outstanding book on the complex institutional challenges Latin American states are facing today in their combat against organised crime and insecurity. This seminal work provides a fascinating account of the recent Chilean experience in which a series of security networks and public policies has been established to counteract organized crime. Solar offers a fresh new way of looking at governance and policy-making issues in the field of public security which can be transferred and applied into other developing nations.'—Patricio Silva, Leiden University, The Netherlands

Government and Governance of Security: The Politics of Organised Crime in Chile