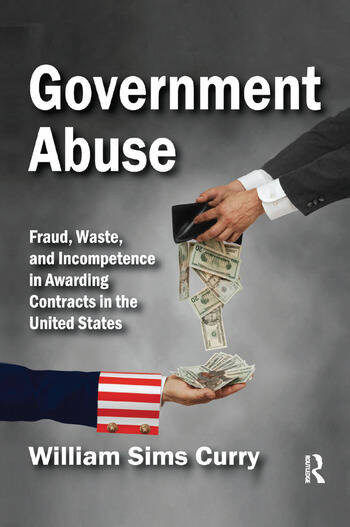 Government Abuse: Fraud, Waste, and Incompetence in Awarding Contracts in the United States

Government contracting is plagued by nefarious, amateurish, and criminal behavior. By awarding government contracts to corporations as compensation for lavish gifts and personal favors, the United States government fails to serve the public interest effectively and honestly. William Sims Curry identifies and categorizes multiple deficiencies in how government contractors are selected, and proposes how reforms can be instituted.

This book is based on extensive research. Curry sifted through two years worth of contractor claims maintained by the Government Accountability Office (GAO) regarding improper behavior of federal government agencies during the contract award process. He identified additional government contracting failures through review of media stories, inspector general reports, court cases, and press releases by government investigatory agencies.

Much of this abuse originates from the mandated but ineffective practice of color coding rating proposals and a subjective ratings system. Curry proposes replacing the current practice with a scoring system that weighs contractor selection criteria according to the government's needs. This, along with the other procurement reforms Curry recommends, offers promise for an alternative to the fraud, waste, and incompetence currently rampant in government contracting.

1 Defining and Narrowing the Problems of Fraud, Incompetence, Waste, and Abuse
2 Government of the Corporations, by the Unions, and for the Special Interests
3 Exemplary Actions by Government and Nongovernment Entities for Combating Fraud, Incompetence, Waste, and Abuse
4 Protests Sustained by the GAO for Proposal Evaluation Errors
5 Protests Sustained by the GAO for Other Deficiencies
6 Weaknesses and Strengths of Selected Proposal Rating Processes
7 Imperfections in the DOD's Efforts to Improve Its Process for Selecting Contractors
8 Single-Score Best-Value Selection Process Eliminates Ambiguity
9 Scandalous Socioeconomic Contracting Practices
10 The Absurdity of Waiving All Procurement Controls during Disasters
11 Compendium of Measures for Minimizing Fraud, Incompetence, Waste, and Abuse in the Federal Government

Appendix A
Appendix B
Appendix C

Government Abuse: Fraud, Waste, and Incompetence in Awarding Contracts in the United States