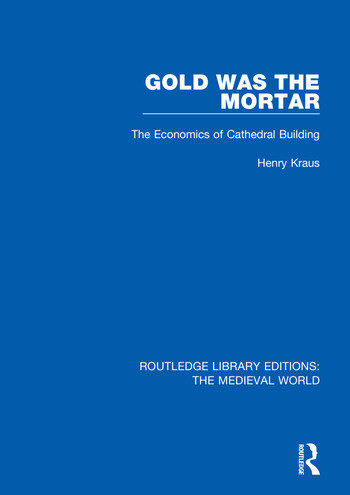 Gold Was the Mortar: The Economics of Cathedral Building

Originally published in 1979, Gold Was the Mortar details the financing and the building of the medieval cathedrals at Paris, Amiens, Toulouse, Lyon, Strasbourg, York, Poitiers and Rouen. The book examines the raising of funds and their expenditure, not only on the Cathedrals themselves, but also on the worldly ambitions of the bishop or archbishop, which went beyond the ‘wars and natural disasters’ theory to explain the reasons that caused the delays in building the cathedrals. The book also looks at the issues of building the cathedrals, such as the availability of finance and how for some there was a steady flow of funds while others suffered prolonged breaks. The book also provides case studies of specific cathedrals and examines how places such as York were held up by the internecine disputes with Canterbury; Toulouse and Poiters by the vast expropriations following conquests; and Lyon by the suppression of the commercial and social hierarchy. All the cathedrals depended on the benevolence of patrons, but the part played by the commoners, as revealed in wills and contemporary documents, was an extraordinary contribution, usually exceeding that of the nobility and royalty and sometimes that of the hierarchy itself.

4. Lyon: The Bridge to France

8. Rouen: The Wages of Submission

Gold Was the Mortar: The Economics of Cathedral Building