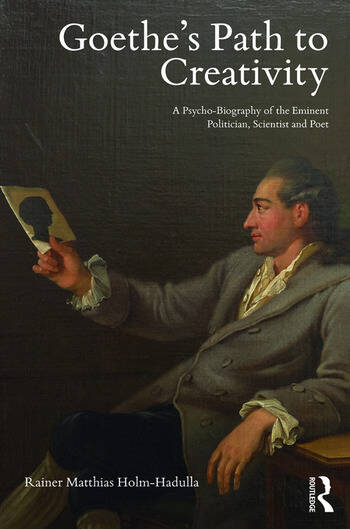 Goethe’s Path to Creativity provides a comprehensive psycho-biography of Johann Wolfgang von Goethe, a giant of modern German and European literary, political, and scientific history. The book brings this influential work by Rainer Matthias Holm-Hadulla to the English language for the first time in a newly elaborated edition.

Goethe’s path to creativity was difficult and beset by a multitude of crises, beginning with his birth, which was so difficult that he was initially not thought to have survived it, and ending with an infatuation that left him, at the age of 74, toying with the same kind of suicidal thoughts he had entertained as a 20-year-old. Throughout his long life, he suffered bitter disappointments and was subject to severe mood swings. Despite being a gifted child, a widely recognized poet, and an influential scientist and politician, he spent his entire life loving and suffering; nonetheless, he had the exceptional ability to endure emotional pain and to transform his sufferings creatively. The way in which he mined his passions for creative impulses continues to inspire modern readers. Readers can apply the lessons they have learned from his life and use Goethe’s strategies for their own creative art of living.

will be of great interest to all engaged in the fields of creativity, literature, psychoanalysis, psychology, psychotherapy, and personal growth.

Rainer Matthias Holm-Hadulla is Professor for Psychiatry, Psychosomatic Medicine, and Psychotherapy at Heidelberg University, Germany. He is a Training Analyst (IPA) and teaches at universities in Buenos Aires and Santiago de Chile and at the Pop-Academy, Mannheim. Professor Holm-Hadulla is the author of over 100 scientific papers, as well as six books on creativity, counselling, and psychotherapy, including The Art of Counselling and Psychotherapy (Karnac 2004) and The Recovered Voice: Tales of Practical Psychotherapy (Karnac 2017). Previous versions of his Psycho-Biography of Johann Wolfgang von Goethe have been published in German, Spanish, Italian, and Persian.