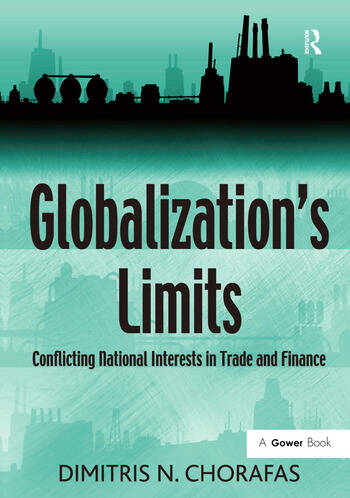 So far there has been only praise for globalization. However, the export wave of China’s manufacturing machine and, more recently, the Global financial crisis show that globalization has limits. Globalization, the internationalization of trade, and financial integration are having enormous implications for businesses as well as for the whole economies of countries or blocks of countries. In this book Dr Chorafas argues that research is now producing evidence that there are limits to such globalization and amalgamation and that these need to be better defined and understood if some of the problems now being identified are to be prevented from applying the brakes, or worse, putting the process into reverse gear. The author examines the impact on countries such as the United States and European Union of occurrences like China's emergence as a massive manufacturing platform and the distortions of trade that result, affecting countries' GDP and creating problems such as uncontrollable current account deficits. He also considers the effect of Sovereign Wealth Funds as new entrants on the scene. These, he argues, are seen by some as 'the Trojan horses of state capitalism', particularly in what he defines as the 'absence of a global sheriff'. Globalization’s Limits looks at the EU and the Euroland as a test of globalization. The conclusions Chorafas draws about the effect on member states of pan-European banking, and the Euro as common currency, have implications for Britain and for the rest of the world. Issues relating to missed opportunities and leadership beg questions such as 'Who, if anybody, is or should be in charge of global monetary policy?

Professor Dr Dimitris Chorafas is an academic and consultant. He is a member of the New York Academy of Sciences and the Ecole Polytechnique Federale de Lausanne (EPFL). Dr Chorafas is a n engineering graduate of the National Technical University of Athens and of UCLA. He undertook postgraduate studies in finance and he is a Doctor of Science (in maths and logic from the Sorbonne). He has been a Fulbright Scholar and has taught in universities around the world. During his career, Dr Chorafas has been a consultant to the board of UBS, Bank of Scotland, Commerzbank, Istituto Bancario Italiano, Italcementi, AEG, Telefunken, GE Bull, and Nestle. Over 8,000 executives around the world have attended his seminar programme. In 1992, in conjunction with the Swiss Academies of Sciences, he established his Foundation which grants awards to PhD students at 25 universities worldwide. Dr. Chorafas has authored 150 books.

’Part 1 of this volume provides a detailed assessment of the growing impact of China and India on world markets, and of the economic difficulties and uncertainties confronting Europe. There is also an excellent discussion of the recent setbacks to the globalization process caused by the current financial crisis and the consequent rise in economic nationalism. The remaining two parts of this excellent volume consider the globalization of finance (Part 2) and the limitations of globalization (Part 3), using the Eurozone as a case study.’ - Economic Outlook and Business Review