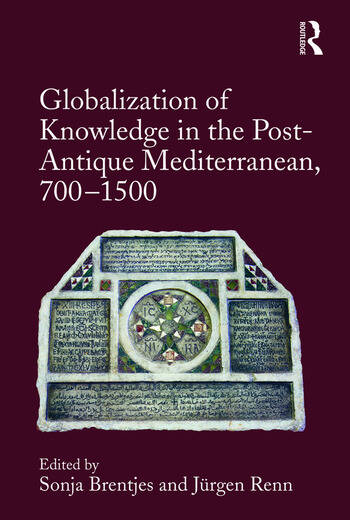 Globalization of Knowledge in the Post-Antique Mediterranean, 700-1500

The contributions to this volume enter into a dialogue about the routes, modes and institutions that transferred and transformed knowledge across the late antique Mediterranean and the Persian Gulf. Each contribution not only presents a different case study but also investigates a different type of question, ranging from how history-writing drew on cross-culturally constructed stories and shared sets of skills and values, to how an ancient warlord was transformed into the iconic hero of a newly created monotheistic religion. Between these two poles, the emergence of a new, knowledge-related, but market-based profession in Baghdad is discussed, alongside the long-distance transfer of texts, doctrines and values within a religious minority community from the shores of the Caspian Sea to the mountains of the southern Arabian Peninsula. The authors also investigate the outsourcing of military units and skills across religious and political boundaries, the construction of cross-cultural knowledge of the balance through networks of scholars, patrons, merchants and craftsmen, as well as differences in linguistic and pharmaceutical practices in mixed cultural environments for shared corpora of texts, drugs and plants.

Introduction, Renn and Brentjes / From one universal historiography to the other: the reorientation of ancient historiography in Byzantium and its reception in Arabic - The Islamic organization of written memory, Niehoff-Panagiotidis / Aspects of craft in the Arabic book revolution, Gruendler / Contexts and content of Thābit ibn Qurra’s (died 288/901) construction of knowledge on the balance, Brentjes and Renn / Monarchs and minorities: ‘infidel’ soldiers in Mediterranean courts, Fancy / The Synonyma literature in the 12th and 13th centuries, Burnett / The cultural transfer of Zaydī and non-Zaydī religious literature from northern Iran to Yemen (12th century through 14th century), Ansari and Schmidtke / Iskandar the prophet: religious themes in Islamic versions of the Alexander legend, Akasoy / Postface, Brentjes and Renn / Index.

"The editors assume that after the disintegration of the Roman Empire the Mediterranean continued to be a highly integrated region. Despite a growing political, economic and cultural diversity people, artefacts, ideas and knowledge continued to move back and forth between the Mediterranean, the Arabian peninsula, the Indian subcontinent and central Asia… The focus of the contributions is on the circulation of scholarly knowledge and the forms of its transmission…Texts of this kind will expand our future knowledge of intercultural transfers and will increase the Mediterranean region's visibility as a zone of integration." H-Net Reviews; October 2016

"Globalization of Knowledge in the Post-Antique Mediterranean, 700–1500, offers a very interesting window into the ongoing debates sponsored by the Max Planck Institute for the History of Science. Furthermore, the volume is a representative collection of materials and methods involved in the study of knowledge, knowledge transfer, and globalization in the premodern world. It would be of benefit for anyone interested in the underlying mechanics of the globalization of knowledge: the routes, modes, and institutions involved in the transfer and transformation of knowledge." Shahrzad Irannejad, Isis Review

Globalization of Knowledge in the Post-Antique Mediterranean, 700-1500