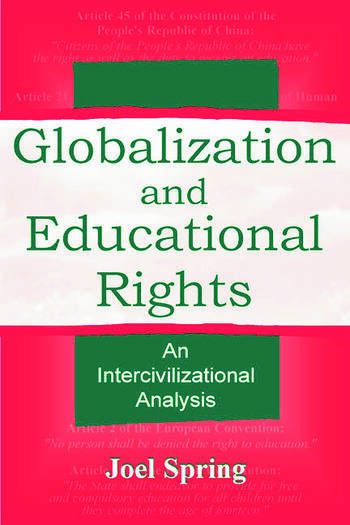 Education in the 21st century is widely viewed as a necessary condition for the promotion of human welfare, and thus identified as a basic human right. Educational rights are included in many national constitutions written since the global spread of human rights ideas after World War II. But as a global idea, the meaning of educational rights varies between civilizations. In this book, which builds on the concept of the universal right to education set forth in Spring's The Universal Right to Education: Justification, Definition, and Guidelines, his intercivilizational analysis of educational rights focuses on four of the world's major civilizations: Confucian, Islamic, Western, and Hindu.

"This volume is a useful resource for students of the social foundations of education and for educators preparing for the challenges of increasing intercivilizational classrooms."
—CHOICE

"The strength of Spring's analysis lies in its comparative orientation. This is perhaps one of the first serious works that looks at the articulation of educational rights at the global level from a comparative perspective. It certainly paves way for other students, researchers, and scholars of comparative education to take up research along these lines."
—Comparative Educational Review

"...this book is worth a read, and cuts new ground in relating talk about educational rights to globalization. The very comparison of systems of rights around education, including liberty, equality, and educational opportunity, represents an important contribution to discussion and debate."
—Globalization, Societies and Education

"One of the few books that analyzes the meaning of universal freedom within the current debates over the globalization of capital. This is not only an important book, but an urgent one...."
—Peter McLaren
University of California, Los Angeles

"What I like most is the clear definition of the terms/ideas that Spring uses as the basis for creating a new vision of education and for evaluating existing systems of schooling."
—David Gabbard
East Carolina University