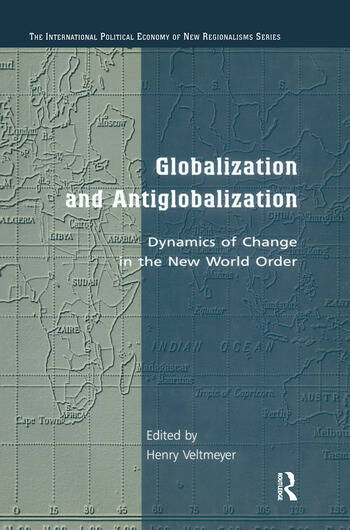 Globalization and Antiglobalization: Dynamics of Change in the New World Order

Globalization has changed the context for, and the organizational forms of, politics, unleashing forces in support of, and in opposition to, the globalization dynamic. Investigating the dynamics of change and development in two regions of the world economy, Latin America and Asia, this book evaluates these forces, their political dynamics, and the responses of governments and citizens.

Henry Veltmeyer is Professor of Sociology and International Development Studies at Saint Mary's University in Halifax, Canada, and is also Adjunct Professor in Sociology of Development at the Universidad Autonoma de Zacatecas, Mexico.

'This book is a timely and important contribution to the next phase of the debate on globalization. The focus on positive and negative consequences and the politics of social responses to globalization is precisely where the discussion should be going.' Barry K. Gills, University of Newcastle, UK

Globalization and Antiglobalization: Dynamics of Change in the New World Order