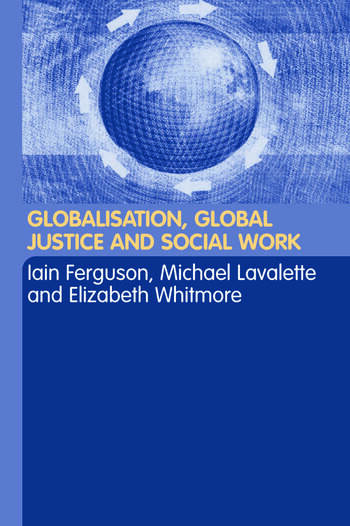 Globalization has become a seemingly unstoppable force over recent decades and, in its wake, global notions of social justice have developed in response to its negative aspects. Neo-liberal economic policies have been a key element in the wider process of globalization, and these policies have had a profound impact on welfare provision and the shape of social work practice. Arising dissatisfaction among users of welfare and social work services is fuelling the search for a new, more radical social work that is firmly rooted in principles of social justice.

Globalisation, Global Justice and Social Work explores the global effects of neo-liberal policies on welfare services in different countries, with contributions from social work academics, practitioners and welfare activists around the world. The first section of the book presents case studies of impact of neo-liberalism on welfare systems, social service provision and the practice of social work. In the second section the chapters explore the relationship between social work practice and the struggle for social justice. Authors discuss the personal and political dilemmas they have had to address in seeking to link a personal commitment to social justice with their daily practice as workers and educators in social work. The final section assesses the prospects for social work practice based on notions of social justice, by looking at what can be learned from the experience of previous radical movements as well as from emergent global and local movements.

Part 1: Social Work, Social Welfare and the Impact of Neo-liberal Globalisation  1. Social Work in Mexico: Towards a Different Practice  2. Neoliberalism in Argentina, Social Policy, Welfare and the Conditions for the Development of Social Work  3. Social Work and Social Development  4. Changes in Social Policy and the Social Services in Senegal  5. New Arenas for Social Intervention in France: Addressing Integration, Social Control and Racialisation  Part 2: Neo-liberal Globalisation and its Impact on Social Workers and Clients  6. Globalisation, Neo-liberal Managerialism and UK Social Work  7. The Neo-liberal Assault: Voices from the Frontline of British State Social Work  8. Through the Eye of a Needle: The Challenge of Getting Justice in Australia if you're Indigenous or Seeking Asylum  9. Compromise, Collaboration and Colllective Resistance: Different Strategies in the Face of the War on Asylum Seekers  10. Educating for Justice: Challenges and Openings in the Context of Globalisation  Part 3: Plotting a Way Forward?  11. Americn Exceptionalism and Critical Social Work: A Retrospective and Prospective Analysis  12. Working in a Different Space: Linking Social Work and Social Development  13. Popular Resistance to Global Corporate Rule: The Role of Social Work (With a Little Help from Gramsci and Freire)  14. ''Another World is Possible'': Social Work and the Struggle for Social Justice

Iain Ferguson is a lecturer in social work at the University of Striling. He has written widely on issues of service user involement (particularly in the area of mental health), participatory and emancipatory research, asylum seekers and social welfare theory. Prior to moving into academic life, he worked for many years as a social worker and community worker and he is a qualified Mental Health Officer.

Michael Lavalette is a lecturer in Social Policy at the University of Liverpool. He has written widely on issues of child labour, the politics of childhood, social welfare and social movement activity.