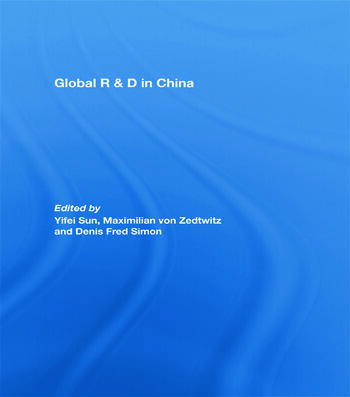 The volume focuses on the issue of globalization of research and development (R&D) in China.

China has become the number one choice of R&D for multination corporations (MNCs), according to a recent survey. Many of the largest MNCs in the world, such as Microsoft, GE, GM, HP, Motorola, and Lucent, among hundred of others, have established R&D facilities. The phenomenon has become a hot issue among policy debates in many countries regarding job outsourcing, national and regional competitiveness, and China. This book examines the issue of foreign R&D, particularly, those from MNCs in China: the drivers, missions, locations, management challenges, policies, and implications for China’s innovation system.

This book was previously published as a special issue of the Asia Pacific Business Review.

Yifei Sun is associate professor at the Department of Geography, California State University Northridge. His research interests lie with in urban and regional economics, particularly in the relationship between technology and urban/regional development in China. He served as the Chair of the China Specialty Group, the Association of American Geographers from 2004-2005. Right now, he is working on the US. National Science Foundation funded project: “Foreign Research and Development Investment in China.”  He has published a number of articles related to technology development in China in journals such as Regional Studies, Environment and Planning A, Eurasia Geography and Economics, among others.

Max von Zedtwitz is a Professor of Technology & Innovation Management at Tsinghua University, Beijing, P.R. China, and Director of the Research Center for Global R&D Management with locations in Beijing and St. Gallen, Switzerland. Max von Zedtwitz’s research focuses on R&D management, in particular transnational R&D organization and technology-based entrepreneurship. He has published five books and more than forty articles in leading practitioner and academic journals in English, German, French, Japanese and Chinese. He has been also cited in The New York Times, the International Herald Tribune, Der Spiegel, Le Temps, and NZZ. He currently serves on the editorial boards of R&D Management, Journal of International Management, Technological Analysis and Strategic Management, and three other international journals.

Denis Fred Simon is Provost and Vice President at the Levin Institute of International Relations and Commerce, State University of New York. Dr. Simon's distinctive competence is that he is one of a select number of global management experts with dual knowledge of both business strategy & technology management and Asian business systems and cultures. He has written and lectured widely regarding innovation, high technology development, foreign investment and corporate strategy in the PacRim and is frequently quoted in the Western and Asian business press regarding commercial and technology trends in China, HK and the Asia-Pacific region.