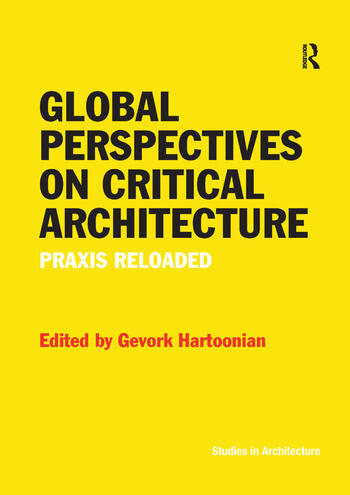 Judging from the debates taking place in both education and practice, it appears that architecture is deeply in crisis. New design and production techniques, together with the globalization of capital and even skilled-labour, have reduced architecture to a commodified object, its aesthetic qualities tapping into the current pervasive desire for the spectacular. These developments have changed the architect’s role in the design and production processes of architecture. Moreover, critical architectural theories, including those of Breton, Heidegger and Benjamin, which explored the concepts of technology, modernism, labour and capital and how technology informed the cultural, along with later theories from the 1960s, which focused more on the architect’s theorization of his/her own design strategies, seem increasingly irrelevant. In an age of digital reproduction and commodification, these theoretical approaches need to be reassessed. Bringing together essays and interviews from leading scholars such as Kenneth Frampton, Peggy Deamer, Bernard Tschumi, Donald Kunze and Marco Biraghi, this volume investigates and critically addresses various dimensions of the present crisis of architecture. It poses questions such as: Is architecture a conservative cultural product servicing a given producer/consumer system? Should architecture’s affiliative ties with capitalism be subjected to a measure of criticism that can be expanded to the entirety of the cultural realm? Is architecture’s infusion into the cultural the reason for the visibility of architecture today? What room does the city leave for architecture beyond the present delirium of spectacle? Should the thematic of various New Left criticisms of capitalism be taken as the premise of architectural criticism? Or alternatively, putting the notion of criticality aside is it enough to confine criticism to the production of insightful and pleasurable texts?

Gevork Hartoonian is Professor of History and Theory of Architecture, and Course Convener of Master of Architecture at the University of Canberra, Australia. His research is focused on a critical archaeology of modern architecture’s appropriation of the nineteenth-century architectural discourses, the tectonics in particular. Hartoonian has contributed to numerous books, journal essays, conference proceedings, and is the author of several books, including Architecture and Spectacle: a critique, Ashgate, 2012; The Mental Life of the Architectural Historian (pp.bk, 2013, 2011), Walter Benjamin and Architecture (pp.bk 2013, 2010), and Ontology of Construction (1994) a Korean edition of which was published in 2010. He was the 2013 visiting professor of architecture at Tongji University, Shanghai, China.

’Globalization is the watchword of the 21st century from which nothing seems immune. Architecture in this new world vision awaits significant theoretical analysis, a vacuum that Global Perspectives on Critical Architecture: Praxis Reloaded addresses with rare critical depth. After decades of introverted and unengaged criticality� discourse of the Any and Assemblage ilk, Hartoonian’s collection of essays finally offers a rich array of themes and ways of approaching specific projects, including the IBA, Bilbao’s Guggenheim, Parc La Villette, contemporary Chinese architecture, and many others. From the thoughtful interviews with Kenneth Frampton and Mary McLeod to the probing dissections of the culture of late capitalism and globalization of Simone Brott, Esra Ackan, and especially Peggy Deamer and Nadir Lahiji, the reader finds a newly problematized approach to the relation of architecture to globalization.’ Diane Ghirardo, University of Southern California, USA