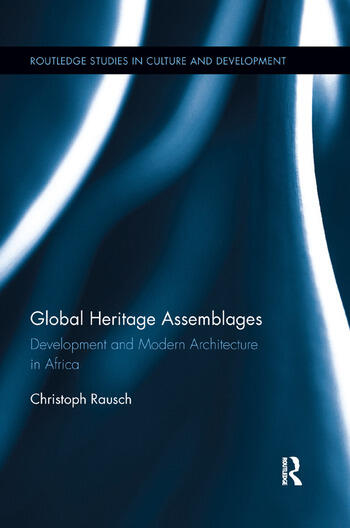 UNESCO aims to tackle Africa’s under-representation on its World Heritage List by inscribing instances of nineteenth- and twentieth-century modern architecture and urban planning there. But, what is one to make of the utopias of progress and development for which these buildings and sites stand? After all, concern for ‘modern heritage’ invariably—and paradoxically it seems—has to reckon with those utopias as problematic futures of the past, a circumstance complicating intentions to preserve a recent ‘culture’ of modernization on the African continent.

This book, a new title in Routledge’s Studies in Culture and Development series, introduces the concept of ‘global heritage assemblages’ to analyse that problem. Based on extensive anthropological fieldwork, it describes how various governmental, intergovernmental, and non-governmental actors engage with colonial and post-colonial built heritage found in Eritrea, Tanzania, Niger, and the Republic of the Congo. Rausch argues that the global heritage assemblages emerging from those examples produce problematizations of the modern’, which ultimately indicate a contemporary need to rescue modernity from its dominant conception as an all-encompassing, epochal, and spatial culture.

Prologue: A Cult of Heritage

1. Global Heritage Assemblages: Towards an Anthropology of the Contemporary

5. Modern Nostalgia: Asserting Politics of Sovereignty and Security in Asmara, Washington and Brussels

7. Many Words for Modern: Negotiating Ethics of Legitimacy and Responsibility in Dar es Salaam, Utrecht, Amsterdam and Accra

8. Ethics of Legitimacy and Responsibility

9. Conclusion: Contemporary Politics, Technologies and Ethics to the Rescue of Modernity

Christoph Rausch is an assistant professor in the Humanities and Social Sciences at University College Maastricht, the Netherlands