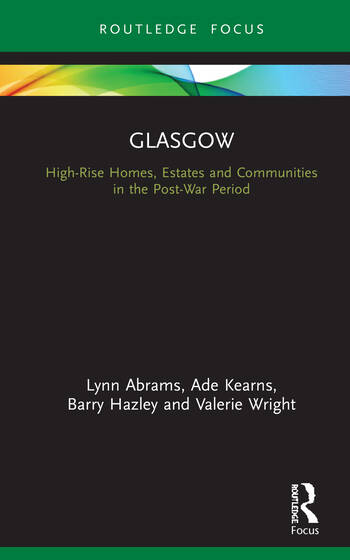 Glasgow: High-Rise Homes, Estates and Communities in the Post-War Period

In the wake of an unparalleled housing crisis at the end of the Second World War, Glasgow Corporation rehoused the tens of thousands of private tenants who were living in overcrowded and unsanitary conditions in unimproved Victorian slums. Adopting the designs, the materials and the technologies of modernity they built into the sky, developing high-rise estates on vacant sites within the city and on its periphery.

This book uniquely focuses on the people's experience of this modern approach to housing, drawing on oral histories and archival materials to reflect on the long-term narrative and significance of high-rise homes in the cityscape. It positions them as places of identity formation, intimacy and well-being. With discussions on interior design and consumption, gender roles, children, the elderly, privacy, isolation, social networks and nuisance, Glasgow examines the connections between architectural design, planning decisions and housing experience to offer some timely and prescient observations on the success and failure of this very modern housing solution at a moment when high flats are simultaneously denigrated in the social housing sector while being built afresh in the private sector.

is aimed at an academic readership, including postgraduate students, scholars and researchers. It will be of interest to social, cultural and urban historians particularly interested in the United Kingdom.

Removal and return of high rise

A retrospective study of the postwar high rise experience

Life on the periphery: a lack of foresight

‘You’ve to go into the city’: social facilities

Children and play: ‘nae use for the bairns’

Narratives of community loss and decline

Lynn Abrams is Professor of Modern History at the University of Glasgow. Her research focuses on the modern history of gender relations, the practice and theory of oral history and the social and cultural history of modern Scotland.

Ade Kearns is Professor of Urban Studies at the University of Glasgow. He has published widely on housing, neighbourhoods and community cohesion and led the GoWell programme, a long-term study of the impacts of regeneration in Glasgow.

Barry Hazley is Derby Fellow in the Institute of Irish Studies, University of Liverpool and Research Fellow on a project examining Northern Irish migrants during the Troubles in Great Britain. His research focuses on the social and cultural history of modern Britain and Ireland.

Valerie Wright is a historian of modern Britain with expertise in gender, social and political history. She is currently Research Fellow in the Faculty of Social Sciences at the University of Stirling.

Glasgow: High-Rise Homes, Estates and Communities in the Post-War Period