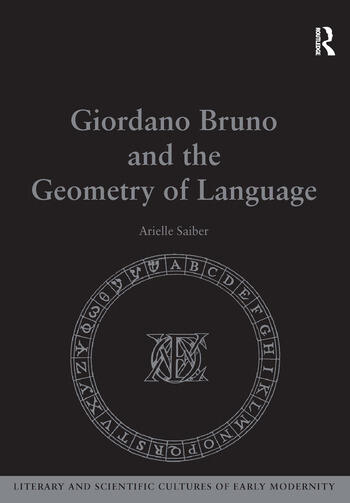 Giordano Bruno and the Geometry of Language

Giordano Bruno and the Geometry of Language brings to the fore a sixteenth-century philosopher's role in early modern Europe as a bridge between science and literature, or more specifically, between the spatial paradigm of geometry and that of language. Arielle Saiber examines how, to invite what Bruno believed to be an infinite universe-its qualities and vicissitudes-into the world of language, Bruno forged a system of 'figurative' vocabularies: number, form, space, and word. This verbal and symbolic system in which geometric figures are seen to underlie rhetorical figures, is what Saiber calls 'geometric rhetoric.' Through analysis of Bruno's writings, Saiber shows how Bruno's writing necessitates a crafting of space, and is, in essence, a lexicon of spatial concepts. This study constitutes an original contribution both to scholarship on Bruno and to the fields of early modern scientific and literary studies. It also addresses the broader question of what role geometry has in the formation of any language and literature of any place and time.

'Giordano Bruno has found in Arielle Saiber an interpreter most suited to his geometrical-rhetorical prose. She can mirror and match his rhetorical mode and couple this with a thorough knowledge of the mathematics of Bruno's day... Her interpretation of his work rests on impressive erudition: a familiarity with all of his published works, their various editions and translations (along with the critical literature these have evoked), knowledge of ancient and modern literary criticism and rhetoric, and relevant studies in the history of science... Saiber demonstrates convincingly that Bruno's metaphysical geometry generated his choice of figures, and her fecund interpretation of his work will surely lead to further explorations.' Renaissance Quarterly '... a study that is as rewardingly rich and strange as its subject... this book has great potential as a text in a graduate-level History or English seminar, particularly one focused on the history of language and ideas. Scholars of Italian history and language - like Saiber - will likewise see rewarding uses for this book... she amply succeeds in convincing her reader that Bruno understood in deep and profound ways that geometry is a part of language and as such a useful tool for visualizing, conceiving and expressing language in form and concept. Those interested in exploring the common language of literature, rhetoric and mathematics [...] will find much rewarding material to reflect upon Saiber's compelling, highly readable study.' Early Modern Literary Studies '... astonishingly original text... Though Bruno is always difficult reading, this volume's extraordinary lucidity makes us forget that characteristic... Saiber's own language is as magical as the realms to which she transports us... This intelligent commentary is as illuminating and provocative as it is unpedantic. In the introduction Saiber tells her readers that she aims to write a book of which Giordano Bruno would approve. She has managed, in th

Giordano Bruno and the Geometry of Language