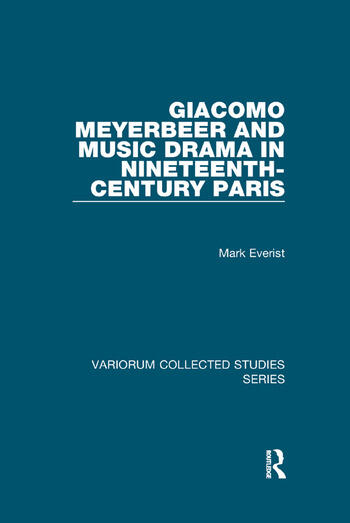 Nineteenth-century Paris attracted foreign musicians like a magnet. The city boasted a range of theatres and of genres represented there, a wealth of libretti and source material for them, vocal, orchestral and choral resources, to say nothing of the set designs, scenery and costumes. All this contributed to an artistic environment that had musicians from Italian- and German-speaking states beating a path to the doors of the Académie Royale de Musique, Opéra-Comique, ThéÃ¢tre Italien, ThéÃ¢tre Royal de l'Odéon and ThéÃ¢tre de la Renaissance. This book both tracks specific aspects of this culture, and examines stage music in Paris through the lens of one of its most important figures: Giacomo Meyerbeer. The early part of the book, which is organised chronologically, examines the institutional background to music drama in Paris in the nineteenth century, and introduces two of Meyerbeer's Italian operas that were of importance for his career in Paris. Meyerbeer's acculturation to Parisian theatrical mores is then examined, especially his moves from the Odéon and Opéra-Comique to the opera house where he eventually made his greatest impact - the Académie Royale de Musique; the shift from Opéra-Comique is then counterpointed by an examination of how an indigenous Parisian composer, Fromental Halévy, made exactly the same leap at more or less the same time. The book continues with the fates of other composers in Paris: Weber, Donizetti, Bellini and Wagner, but concludes with the final Parisian successes that Meyerbeer lived to see - his two opéras comiques.

Mark Everist is a Professor in the Department of Music, at the University of Southampton, UK.

’The writings contained in this volume are truly representative of a scholar who has made a lasting impression on the field of French opera in the mid-nineteenth century.’ Nineteenth-Century Music Review