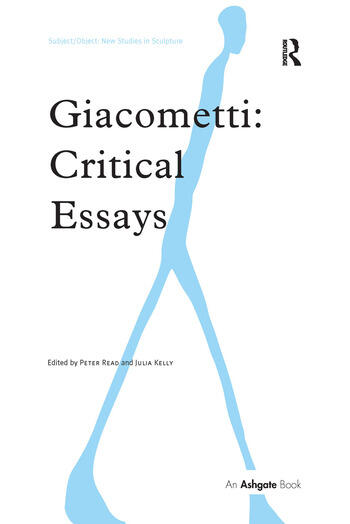 Giacometti: Critical Essays brings together new studies by an international team of scholars who together explore the whole span of Alberto Giacometti's work and career from the 1920s to the 1960s. During this complex period in France's intellectual history, Giacometti's work underwent a series of remarkable stylistic shifts while he forged close affiliations with an equally remarkable set of contemporary writers and thinkers. This book throws new light on under-researched aspects of his output and approach, including his relationship to his own studio, his work in the decorative arts, his tomb sculptures and his use of the pedestal. It also focuses on crucial ways his work was received and articulated by contemporary and later writers, including Michel Leiris, Francis Ponge, Isaku Yanaihara and Tahar Ben Jelloun. This book thus engages with energising tensions and debates that informed Giacometti's work, including his association with both surrealism and existentialism, his production of both 'high' art and decorative objects, and his concern with both formal issues, such as scale and material, and with the expression of philosophical and poetic ideas. This multifaceted collection of essays confirms Giacometti's status as one of the most fascinating artists of the twentieth century.

Peter Read is a specialist on modern French literature and the visual arts. His many publications include books on the works of Apollinaire and Picasso and essays on Rodin, Surrealism and 20th-century French poetry. He is currently Professor of French at the University of Kent. Julia Kelly has published and lectured on a varied range of artists and subjects, from Picasso and Giacometti to surrealism and the relationship between art and ethnography. She was a lecturer and co-ordinator for the AHRC Research Centre for Studies of Surrealism and its Legacies at the University of Manchester, where she is now an Honorary Research Fellow.

’This informative and imaginative critical mosaic champions a comparative pallet in approaching the uniqueness of powerful aesthetic artefacts. [...] The book will absorb literary critics as much as art historians: it is a testimony to Giacometti’s own iconic figure striding confidently forwards but enveloped in the frames allowing him to move.’ French Studies