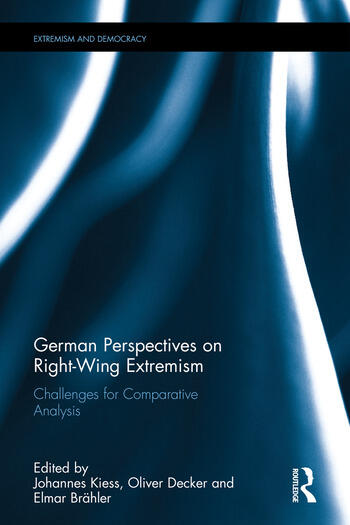 This book discusses right-wing extremism by analysing Germanophone research on this topic for the first time in English, including unique survey data from Germany and Austria. Highlighting how questions of terminology can become complicated when country cases are compared, the authors analyse theoretical and methodological issues in relation to the question of right-wing extremism. In Anglo-American academia, the term is often associated with fairly rare phenomena in the form of extremist political groups, whereas in Germany the term is often applied to a wide range of attitudes, behaviours and parties, including those which operate more within the mainstream political sphere.

Part I: Methodological Challenges and Innovations for Comparative Research

3. National Identity and Immigration in the Concepts of Right-Wing Extremism and Societal Security Marc Grimm

4.  A Multi-Method Approach to the Comparative Analysis of Anti-Pluralistic Politics Karin Liebhart

6. Fear of Social Decline and Treading on Those Below? The Role of Social Crises and Insecurities in the Emergence and the Reception of Prejudices in Austria Julia Hofmann

7. Terrorism Made in Germany: the Case of the NSU Michael Edinger & Eugen Schatschneider

Johannes Kiess is Researcher in the EU FP7-project LIVEWHAT at the University of Siegen, Germany, and a phd candidate in political science.

Oliver Decker is a Member of the Faculty of Medicine at the University Leipzig, Germany, Head of the Research Unit Societal Change and Modern Medicine, and Head of the Center for the Study of Right Wing Extremism and Democracy.

Elmar Brähler was until 2013 the head of the Department of Medical Psychology and Medical Sociology at the University of Leipzig, Germany, and is responsible for a longitudinal research project monitoring the right-wing extremism attitudes in Germany (with Oliver Decker).