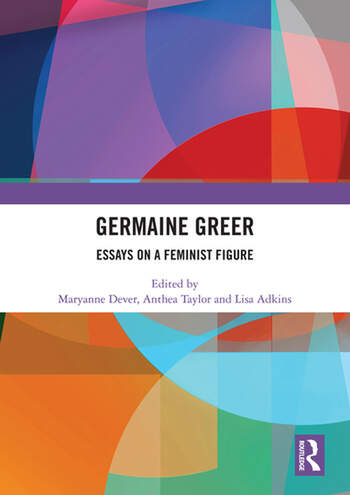 Germaine Greer is one of the most enduring and influential figures of the second wave of the women’s movement. The Female Eunuch (1970) is one of second-wave feminism’s most widely recognised publications and its author has come to embody and indeed expand our understanding of second-wave feminism in a way that few others have. Yet, while Greer’s public visibility never seems to wane, her writings and her politics have failed to attract the kind of sustained critical engagement they warrant. This volume represents the first collection of essays to examine Greer, her politics, her writing, and her status as a feminist celebrity. The essays in this collection cover The Female Eunuch (1970), Greer’s public rivalry with Arianna Stassinopoulos, her time in America, her ideas and politics, and her styling as feminist fashion icon. Many essays include new insights drawn from previously unseen material in the recently launched Germaine Greer Archive at the University of Melbourne, Australia.

This book was originally published as a Special Issue of Australian Feminist Studies.

1. ‘Revolution for the hell of it’: the transatlantic genesis and serial provocations of The Female Eunuch Marilyn Lake

5. ‘If we had more like her we would no longer be the unheard majority’: Germaine Greer’s reception in the United States Rebecca J. Sheehan

Maryanne Dever is a Professor and the Associate Dean in the Faculty of Arts and Social Sciences at the University of Technology Sydney, Australia. She is joint Editor-in-Chief of Australian Feminist Studies.

is a Senior Lecturer in the Department of Gender and Cultural Studies at the University of Sydney, Australia. She is the author of three books, including Celebrity and the Feminist Blockbuster (2016). Her next book is on Germaine Greer, celebrity, and popular feminism.

is a Professor of Sociology and the Head of the School of Social and Political Sciences in the Faculty of Arts and Social Sciences at the University of Sydney, Australia, and Academy of Finland Distinguished Professor (2015-19). She is joint Editor-in-Chief of Australian Feminist Studies.