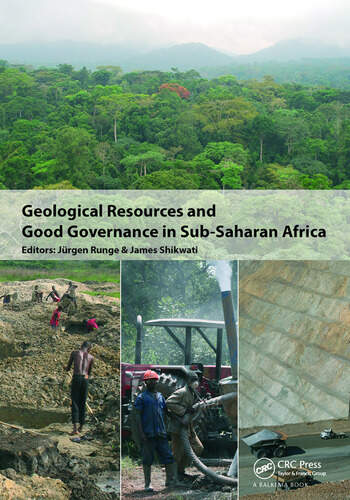 Geological Resources and Good Governance in Sub-Saharan Africa: Holistic Approaches to Transparency and Sustainable Development in the Extractive Sector

This book looks at the distribution, occurrences, potential and prospects for good governance, transparency and sustainable development of geological resources in Sub-Saharan Africa. By bringing together numerous different point of views, it is carried out in a holistic, interdisciplinary and scientific way.

The states of Sub-Saharan Africa are among the world’s most resource-rich regions – yet many of these countries are a long way from attaining their development potential – some are among the least developed in the world. Paradoxically, those countries that are most richly endowed with resources are often the least developed ("paradox of plenty"). This phenomenon is exacerbated in many African countries by inadequate governance; and yet, if the state is unable to provide basic services, the application of social and environmental standards in the extractive and processing sectors will not be effective.

The idea for this volume was conceived during an international conference of the Commission de la Communauté Economique et Monétaire de l’Afrique Centrale (CEMAC) on ‘Geological Resources and Good Governance in Central Africa’ held in September 2009 in Yaoundé, Cameroon. International experts from the political, scientific and private sectors, along with civil society, came together and discussed the various demands being placed on good governance and transparency in the Sub-Saharan raw materials sector and the prerequisites that must be met, and considered how to seek answers to future challenges. New forms of inter-sectorial, transnational governance like the Extractive Industries Transparency Initiative (EITI) and civil society’s transparency movements like Publish What You Pay (PWYP) offer ways to take account of all the different stakeholder interests in the resources sector. In this book there is also a strong focus on artisanal mining, on gender and on the spread of HIV/AIDS in the mining sector.

This publication is addressed to stakeholders in the field, including civil society, international and private development agencies, planners, politicians and decision makers; as well as to researchers such as earth scientists, economists, jurists and political scientists.

Jürgen Runge is a Professor of Physical Geography and Geoecology at the Goethe-University Frankfurt, Germany. As an environmentalist and consultant he has worked for many years on the evolution of tropical landscapes and former and recent climate changes in lower latitudes. He is the editor of the series “Palaeoecology of Africa” and a member in several scientific editorial boards. The outcome of his studies has been used for regional planning (e.g. remote sensing, land use, infrastructure projects and management of natural resources). From 2007-2010 he was working for the German Technical Cooperation (GTZ) leading a subregional project on geological resources, transparency and good governance in Central Africa (CEMAC, Communauté Economique et Monetaire de l’Afrique Centrale).

James Shikwati is a Geographer and Economist and the founder and managing director of the Inter Region Economic Network (IREN) in Nairobi, Kenya. He is an internationally recognized expert for economic and development problems in African countries and has been mainly working on trade, environment and agriculture. He is also the editor of the online magazine "The African Executive". In 2008 Shikwati was appointed by the world economic forum to be one of the most influential ‘Young Global Leaders’

Geological Resources and Good Governance in Sub-Saharan Africa: Holistic Approaches to Transparency and Sustainable Development in the Extractive Sector