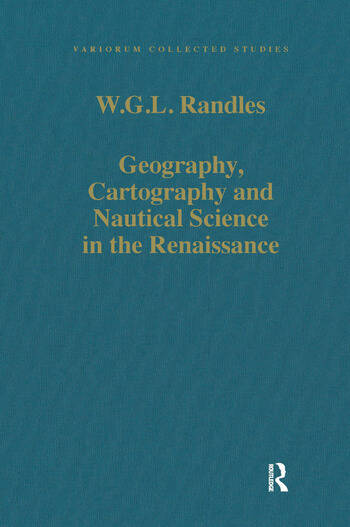 Geography, Cartography and Nautical Science in the Renaissance: The Impact of the Great Discoveries

The transformation of the medieval European image of the world in the period following the Great Discoveries of the 15th and 16th centuries is the subject of this volume. The first studies deal specifically with the emergence of the concept of the terraqueous globe. In the following pieces Dr Randles looks at the advances in Portuguese navigation and cartography that helped sailors overcome the obstacles to the circumnavigation of Africa and the crossing of the Atlantic, and at the impact of the Discoveries on European culture and science. Other articles are concerned with Portuguese naval artillery, and with attempts to classify the indigenous societies of the newly-discovered lands and to map the interior of Africa.

Contents: Preface; Classical models of world geography and their transformation following the discovery of America; The Atlantic in European cartography and culture from the Middle Ages to the Renaissance; The alleged nautical school founded in the 15th century at Sagres by Prince Henry of Portugal called ’the Navigator’; The emergence of nautical astronomy in Portugal in the 15th century; The recovery of Ptolemy’s Geography in Renaissance Italy and its impact in Spain and Portugal in the period of the Discoveries; From the Mediterranean portulan chart to the marine world chart of the Great Discoveries: the crisis in cartography in the 16th century; Bartolomeu Dias and the discovery of the south-east passage linking the Atlantic to the Indian Ocean; La configuration cartographique du continent africain avant et après le voyage de Bartolomeu Dias: hypothèses et enseignements; The evaluation of Colombus’ ’India’ project by Portuguese and Spanish cosmographers in the light of the geographical science of the period; La cartographie de l’Atlantique Ã  la veille du voyage de Christophe Colomb; Colomb découvreur: perceptions contemporaines de son projet et de sa réalisation; La science universitaire en Europe et les découvertes portugaises: Aristotélisme doctrinaire et expérience des navigateurs; Portuguese and Spanish attempts to measure longitude in the 16th century; Pedro Nunes’ discovery of the Loxodromic Curve (1537): how Portuguese sailors in the early 16th century, navigating with globes, had failed to solve the difficulties encountered with the plane chart; Le Nouveau Monde, l’autre monde et la pluralité des mondes; La diffusion dans l’Europe du XVIe siècle des connaissances géographiques dues aux découvertes portugaises; The artilleries and land fortifications of the Portuguese and their adversaries in the early period of the discoveries; ’Peuples sauvages’ et ’états despotiques’: la pertinence, au XVIe siècle, de la grille

’W.G.L. Randles has established a formidable reputation as a historian of geographical thought, cartography, and navigation during the 15th and 16th centuries...Anyone interested in the early modern age of discovery will welcome the ease of access to Randles’s many important articles that Geography, Cartography and Nautical Science in the Renaissance provides.’ 16th Century Journal, Vol. XXXII, No. 3 (2001) 'Historians not directly involved with the history of navigation and maritime cartography will find that many of Randles' articles have been "hidden away." This volume makes up for this and should attract the attention of scholars writing on early European discoveries.' International Journal of Maritime History 'Forty years worth of scholarly activity by the author is brought together in this collection of papers covering a variey of topics relating to maritime discoveries in the early modern period... of great interest to any scholar who is curious about early modern geography, cartography or navigation.' Metascience '... the assembly and translation of the [articles] from a variety of journals, and most importantly, symposium volumes, many of which are scarce on many library shelves, is a fine contribution to scholarship. This is particularly so when they are from such an erudite and accomplished scholar.' Imago Mundi '... provides a most useful window into the work of a distinguished historian whose work has not only crossed several fields but also several linguistic and national traditions of Renaissance scholarship.' Renaissance Quarterly ' The extensive footnotes to texts principally in Latin, Portuguese, Italian, Spanish, French and German, reveal the immense scope of Professor Randles' research and the depth of his erudition... Randles writes with clarity and rigour... The volume [...] is very valuable in preserving formidable scholarship...' Mariner's Mirror

Geography, Cartography and Nautical Science in the Renaissance: The Impact of the Great Discoveries