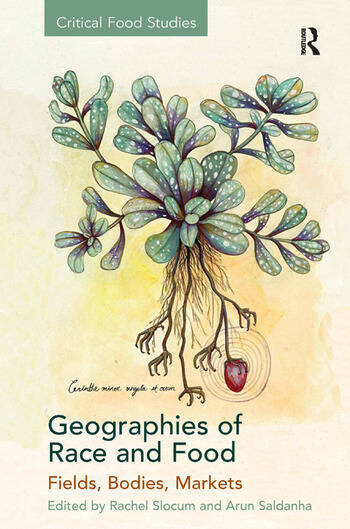 While interest in the relations of power and identity in food explodes, a hesitancy remains about calling these racial. What difference does race make in the fields where food is grown, the places it is sold and the manner in which it is eaten? How do we understand farming and provisioning, tasting and picking, eating and being eaten, hunger and gardening better by paying attention to race? This collection argues there is an unacknowledged racial dimension to the production and consumption of food under globalization. Building on case studies from across the world, it advances the conceptualization of race by emphasizing embodiment, circulation and materiality, while adding to food advocacy an antiracist perspective it often lacks. Within the three socio-physical spatialities of food - fields, bodies and markets - the collection reveals how race and food are intricately linked. An international and multidisciplinary team of scholars complements each other to shed light on how human groups become entrenched in myriad hierarchies through food, at scales from the dining room and market stall to the slave trade and empire. Following foodways as they constitute racial formations in often surprising ways, the chapters achieve a novel approach to the process of race as one that cannot be reduced to biology, culture or capitalism.

Rachel Slocum is Assistant Professor in the Geography and Earth Science Department at the University of Wisconsin, La Crosse. USA, Arun Saldanha is Senior Lecturer at the Lancaster Environment Centre, Lancaster University, UK.

’Critical approaches to race and food have travelled along parallel tracks for too long, seemingly unaware of each other’s concerns. Slocum and Saldanha have now brought these separate strands into productive conversation, tracing the geographies of race and food across fields, bodies and markets, highlighting genuine opportunities for progressive change.’ Peter Jackson, University of Sheffield, UK ’Race and food, food and race. If at first blush this seems an unlikely mix, think again. Starvation, obesity, nutrition, anorexia, food security, food safety, food sovereignty, soul food, diasporic cuisine, the live animal trade, food deserts, eating practices, farmers’ markets, white bread bio-politics, hunger strikes, the very matter of human variability, the colonial histories and geographies of agriculture, bananas, cocoa, sugar and spice...these are just some of the ingredients with which this volume blends the fields of race and food, richly expanding the critical remit of both.’ Kay Anderson, University of Western Sydney, Australia