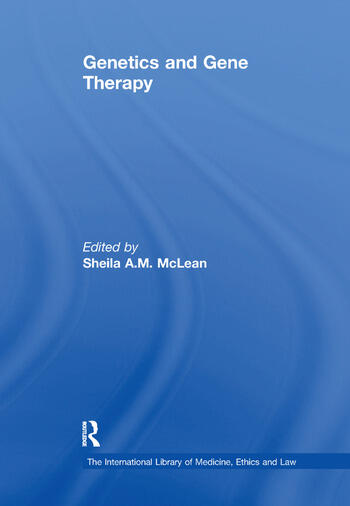 Genetics and Gene Therapy shows the wide range of the debate and the very real significance that genetics and its associated developments have for human beings, individually and collectively. Few areas of science and medicine have resulted in the volume of academic and popular literature as has genetics. The so-called revolution in understanding of the causes of disease states, and even behavioural traits, has focussed public attention on the influence of genes in making us what we are. Rapidly, however, the potential benefits of such understanding were overtaken, in the public mind at least, by the question of the possible (negative) implications of genetic knowledge and associated technologies. The chapters in this volume show just how wide-ranging concern has become, ranging from regulation to cloning, with the fear of discrimination in between. Part One begins with a range of general discussions of about the genetic enterprise itself, followed by consideration of some specific questions. Part Two then addresses cutting edge debates in genetics.

Sheila A.M. McLean is from the University of Glasgow, Scotland.

'... to those ... looking for a 'one stop shop' of current debates in a contentious new area spanning medicine and the law, this book brings together many of the key contributions.' - Health Sociology Review.