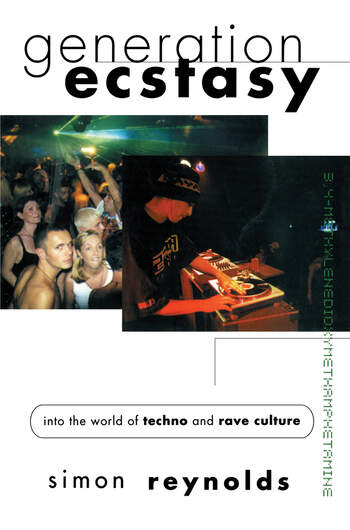 Generation Ecstasy: Into the World of Techno and Rave Culture

In Generation Ecstasy, Simon Reynolds takes the reader on a guided tour of this end-of-the-millenium phenomenon, telling the story of rave culture and techno music as an insider who has dosed up and blissed out. A celebration of rave's quest for the perfect beat definitive chronicle of rave culture and electronic dance music.

Simon Reynolds is a Consulting Editor at Spin magazine. He is the author of Blissed Out: The Raptures of Rock (1990) and, with Joy Press, of The Sex Revolts: Gender, Rebellion and Rock 'n' Roll (1995).

"Worthy. As a straightforward timeline account of rave culture-the DJs, the drugs, the choons, the clubs, the clobber-Generation Ecstasy succeeds. Tracing the music. Reynolds shows that he certainly knows his stuff." -- Now, Toronto
"For anyone who has been to a rave or bought a techno CD, this book is an excellent complement. Reynolds does a great job throughout, even making this book readable for those who know littel or nothing about techno and rave culture." -- Dead Trees Review
"Invaluable." -- Toronto Star
"The single best book about rave culture." -- The Roverfront Times
"A classic chronicle of the Nineties rave movement." -- James Hunter, Rolling Stone
"Ground-breaking." -- Metro, San Jose
"Generation Ecstasy serves as an important cultural critique, a detailed record that brings us up to date on a dynamic social experiment in progress." -- Stephen Sande, The San Francisco Chronicle
"Find yourself a nice comfy couch, put the kettle on and dive into one of the most detailed and passionate accounts of the underground youth subculture referred to as generation ecstasy. Simon Reynolds thinks around this whole topic like no other. Generation Ecstasy is the definitive chronicle of a revved-up, colorful youth subculture that might just be defining a spiritual revolution of sorts." -- Red Journal
"An impressively detailed and well-informed chronology of the last decade's transatlantic nightclub soundtrack..." -- Alex Bellos, Newsday
"Lucid, comprehensive, and smart...Generation Ecstasy is the best available way into what has always been a closed-to-the-grownups world." -- Simon Frith, Village Voice
"Reynolds captures plenty of the thrilling madness of the scene, the drugs, the music, the fuck-the-system energy and all their head-spinning implications... A definitive volume on a wide world of music." -- Will Hermes, Houston Press
"Generation Ecstasy is a more than essential work, helping us to come to terms with a way of life which has defined so many and left its mark on so many more. Simon Reynolds has achieved the near impossible: represented the diverse genres and subgenres of modern dance culture with loving care, while telling the big story in a lucid, stimulating, and thought-provoking way. You've just got to get a look at this one." -- Irvine Welsh, author of Trainspotting
"A great achievement from a world class writer." -- iD

Generation Ecstasy: Into the World of Techno and Rave Culture