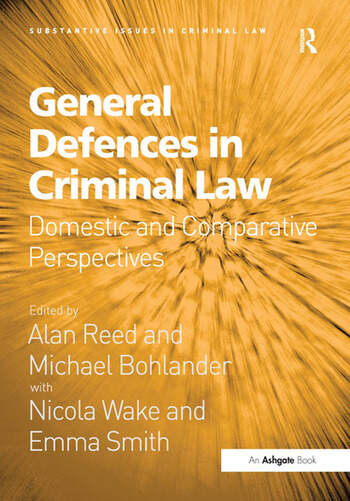 The law relating to general defences is one of the most important areas in the criminal law, yet the current state of the law in the United Kingdom reveals significant problems in the adoption of a consistent approach to their doctrinal and theoretical underpinnings, as exemplified by a number of recent developments in legislation and case law. A coherent and joined-up approach is still missing. This volume provides an analysis of the main contentious areas in British law, and proposes ways forward for reform. The collection includes contributions from leading experts across various jurisdictions. Part I examines the law in the United Kingdom, with specialist contributions on Irish and Scottish law. Part II consists of contributions by authors from a number of foreign jurisdictions, all written to a common research grid for maximum comparability, which provide a wider background of how other legal systems treat problems relating to general defences in the context of the criminal law, and which may serve as points of reference for domestic law reform.

Alan Reed graduated from Trinity College, Cambridge University with a First Class Honours Degree in Law, and was awarded the Herbert Smith Prize for Conflict of Laws and the Dr Lancey Prize. Cambridge University awarded him a full Holland Scholarship to facilitate study in the United States and he obtained an LLM Master's of Law (Comparative Law) at the University of Virginia. After completion of the Law Society Finals Examinations he spent three years in practice in London at Addleshaw Goddard, and also acted as a Tutor in Criminal Law at Trinity College, Cambridge. He spent seven years as a lecturer in law at Leeds University, and from 2001-2012 was engaged as Professor of Criminal and Private International Law and Director of Research at Sunderland University. In April 2012 he commenced new roles as Associate Dean (Research and Innovation) and Professor of Law at Northumbria Law School. Alan has published over 200 monographs, textbooks and articles in the substantive arena in leading journals in England, Australia, New York, Florida and Los Angeles. For the last 10 years he has been editor of the Journal of Criminal Law. Professor Michael Bohlander is the Chair in Comparative and International Criminal Law at Durham Law School. From 1991 until joining Durham University in 2004, he had been a life-tenured member of the German judiciary, sitting in criminal and civil proceedings at trial and appellate level. From 1999 until 2001 he served as the senior legal officer of a Trial Chamber at the International Criminal Tribunal for the Former Yugoslavia in the Hague. He also trained the prosecutors and judges of the Iraqi High Tribunal which tried Saddam Hussein. In 2010, Professor Bohlander was appointed to the Visiting Chair in Criminal Law at the Rijksuniversiteit Groningen in the Netherlands. He was the first non-Muslim visiting scholar ever to teach at the Faculty of Law of Al-Azhar University in Cairo in 2012. He has published 19 books and over 140 articles and comments. His work has been translated into Farsi, French, Spanish and Turkish. Professor Bohlander's publications have been cited widely by and before courts in several domestic and international jurisdictions.

’This publication comes when there is a wide debate concerning modes of liability. Consequently an examination of defences falls into essential focus. It deals expertly with complex issues including transfer, duress, insanity, mistake and reasonableness. The comparative elements are especially welcome. It is an inspiring read and scholarly tool for criminal jurists.’ HE Judge Howard Morrison, International Criminal Court ’At present, the fight against impunity� is fashionable. Whilst the mainstream discusses elements of crime and tries to extend punishability, the defendant’s rights are rather ignored. This compilation fills that gap. It discusses in great detail defences in practice and theory from a general and a comparative perspective. Audi alteram partem!’ Judge Prof. Wolfgang Schomburg, 1995-2008 German Federal High Court and UNICTY/UNICTR ’Any just legal system has to reflect carefully on the situations when an individual can avail herself of a defence so as to avoid criminal liability. Academic scrutiny is also essential to ascertain whether the boundaries set can be justified. By drawing together leading scholars from around the world, Professors Reed and Bohlander have edited a collection that advances this debate significantly and which will be viewed as a vital reference point for all future research in the area.’ Gavin Dingwall, De Montfort University, UK ’In international criminal law, defences derive conceptually from municipal orders which perform their doctrinal basis. Thorough and structured, the discussion of national approaches to defences in this book provides a tool for discussing individual responsibility under international criminal law; particularly useful in jurisdictions which, due to temporal or other concerns, operate outside the normative system of the Rome Statute.’ HE Judge Agnieszka Klonowiecka-Milart, International Judge, Supreme Court, Extraordinary Chambers of the Courts of Cambodia