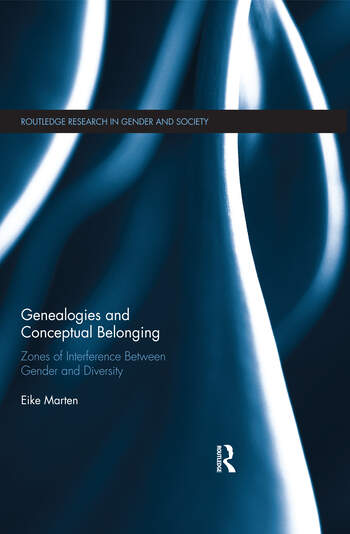 Genealogies and Conceptual Belonging: Zones of Interference between Gender and Diversity

Taking recent German debates of diversity terminology as a case example for scrutinizing enactments of genealogy that assume a linear image of progressive generation, this book engages with performative effects of genealogical stories in academic texts that negotiate conceptual belonging.

While supporters of the developing Diversity Studies in Germany cherish diversity’s potential for multi-category investigations, Gender and Women’s Studies critics reject the term for its neoliberal, managerial rationale, allegedly holding profit above social justice. Genealogies and Conceptual Belonging intervenes in this oppositional debate by turning one’s attention to narrations of the origins of "gender" and "diversity" that suggest their proper place in the present.

Presenting a story about dis/continuous genealogies and highlighting complicated interferences between gender and diversity, Marten forges novel future connections between questions of gender, sexual difference, and diversity. This pioneering volume will be of particular interest to undergraduates, postgraduates and postdoctoral researchers interested in the fields of genealogy, Gender Studies, feminist theory, feminist science studies and critical race / diversity / intersectionality studies.

Part I Stories at Work

A (Feminist) Counter-Narrative: The Figure of Appropriation as a Story-Teller 118

Judith Butler: The Question of Gender and Sexual Difference 183

Audre Lorde: Towards Relating across Differences 235

Futures and Fusions – Seeking beyond History 277

Eike Marten is a postdoctoral researcher within the Faculty of Humanities and Social Sciences at FernUniversität in Hagen, Germany.

Genealogies and Conceptual Belonging: Zones of Interference between Gender and Diversity