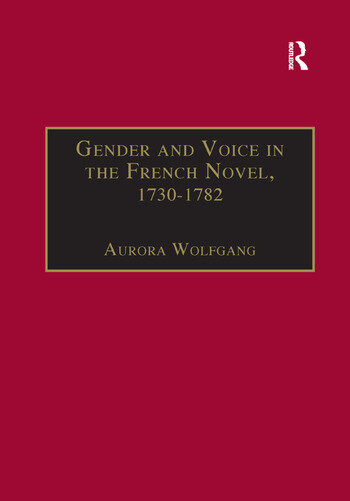 Analyzing four best-selling novels - by both women and men - written in the feminine voice, this book traces how the creation of women-centered salons and the emergence of a feminine poetic style engendered a new type of literature in eighteenth-century France. The author argues that writing in a female voice allowed writers of both sexes to break with classical notions of literature and style, so that they could create a modern sensibility that appealed to a larger reading public, and gave them scope to innovate with style and form. Wolfgang brings to light how the 'female voice' in literature came to embody the language of sociability, but also allowed writers to explore the domain of inter-subjectivity, while creating new bonds between writers and the reading public. Through examination of Marivaux's La Vie de Marianne, Graffigny's Lettres d'une Péruvienne, Riccoboni's Lettres de Mistriss Fanni Butlerd, and Laclos's Les Liaisons dangereuses, she shows that in France, this modern 'feminine' sensibility turned the least prestigious of literary genres - the novel - into the most compelling and innovative literary form of the eighteenth century. Emphasizing how the narratives analyzed here refashioned the French literary world through their linguistic innovation and expression of new forms of subjectivity, this study claims an important role for feminine-voice narratives in shaping the field of eighteenth-century literature.

Aurora Wolfgang is a Professor of French and Director of Women's Studies at California State University, San Bernardino, USA.

'Wolfgang's feminist readings of four major French novels are firmly grounded in cultural history and theory. A major contribution to our understanding of the history of the novel and the history of women, and a powerful intervention in continuing debates about the place of women and the role of gender in an emerging public sphere.' Dena Goodman, Professor of History and Women's Studies University of Michigan 'Wolfgang's evaluation provides exceptional character analyses, especially in the fresh and witty readings of Cécile and the Marquise de Merteuil.' Eighteenth-Century Studies 'This is a probing and finely researched study of four well-known novels that use a female style: two by male authors, and two by women writers... Wolfgang's work looks at often discussed aspects of the four novels and casts them into a new light. Her study, including an extensive bibliography, is an important addition to criticism ont the eighteenth-century French novel.' New Perspectives on the Eighteenth Century 'This is an important study of the engendering of literary style during the eighteenth century... this volume will quickly become required reading for scholars of the period and also for students on modules covering the literature of the eighteenth century.' Modern Language Review ’...a valuable contribution...well documented...very persuasive.’ French Studies