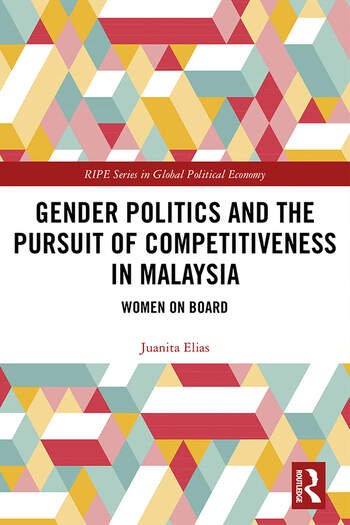 Gender Politics and the Pursuit of Competitiveness in Malaysia: Women on Board

This book is concerned with how the pursuit of national economic competitiveness by states has come to be intertwined with a globalised gender agenda—one in which women and the household economy are seen as ‘untapped’ resources.

In many East and Southeast Asian economies, competitiveness and the dangers of the middle-income trap dominate economic policy agendas: states’ commitments to gender equality goals are frequently framed around ‘business case’ logics in which women’s empowerment and women’s increased engagement in the productive economy is linked to the national economic project of building and enhancing competitiveness. This book looks to the case of Malaysia in order to assess how the increasingly dominant view that gender equality is ‘smart economics’ plays out in practice. Drawing upon extensive case study research and interview data, the book hones in on the complex gender politics that are at work within government initiatives that seek to enhance competitiveness via increasing women’s labour force participation, efforts to strengthen marriage and family life, and attempts to boost women’s entrepreneurialism and status within the corporate world.

Providing an account of the gender politics at work within ongoing processes of state transformation in Asia, this book will appeal to researchers and students in gender studies, Southeast Asian studies, International Political Economy and public policy.

Introduction: Bringing Women ‘On Board’

3. ‘A First Class Mentality with a Heart for Progress’: The Family, Islam and the Moral Political Economy of Competitiveness

4. Civil Society, Market Feminism and the Creation of ‘Board Ready’ Women

Gender Politics and the Pursuit of Competitiveness in Malaysia: Women on Board