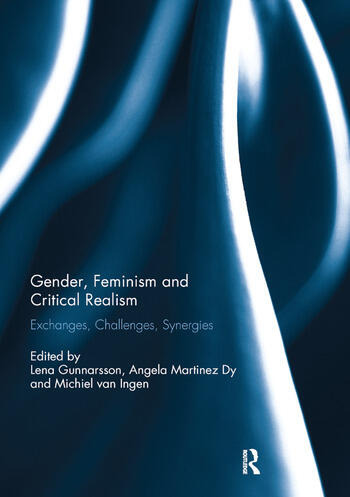 This book marks a pivotal moment in the intensifying dialogue between the philosophical approach of critical realism and the fields of feminist theory and gender research. During the last three decades, these fields have been decisively influenced by poststructuralist perspectives. As such perspectives are increasingly being challenged, this book argues that critical realism is able to serve as a fruitful resource for carving out new paths for feminist theorizing and research. At the same time, it argues that feminist insights on gender and knowledge production have the potential to significantly enrich the field of critical realist philosophy as well. Hence, this book serves as a forum for a number of interventions that, in different ways, explore synergetic potentials as well as tensions between critical realist and various feminist perspectives. It engages in debates over the conditions of knowledge production and the relationship of knowledge to the world, offers new ways of understanding sex, gender and power, as well as the intersectional interplay of diverse power relations, and explores how critical realism relates to new materialist and postpositivist realist approaches. This book was originally published as a special issue of the Journal of Critical Realism.

Introduction – Critical Realism, Gender and Feminism: Exchanges, Challenges, Synergies  1. Theorizing Agency and Domination through a Critical Realist Perspective on Gender Positionality  2. Critical Realist and Postpositivist Realist Feminisms: Towards a Feminist Dialectical Realism  3. Comparing Critical Realism and the Situated Knowledges Approach in Research on (In)equity in Health Care: An Exploration of their Implications  4. Agency and Ontology within Intersectional Analysis: A Critical Realist Contribution  5. Queer Genes: Realism, Sexuality and Science  6. Beyond The Nature/Culture Divide? The Contradictions of Rosi Braidotti’s The Posthuman  7. Review - Pursuing Intersectionality, Unsettling Dominant Imaginaries, by Vivian M. May  8. Review - The Feminine Subject, by Susan Hekman

is Lecturer in Entrepreneurship at the Glendonbrook Institute for Enterprise Development, Loughborough University London, UK. Her research interests include digital and marginal enterprise activity, intersectionality, cyberfeminism and critical realist philosophy.

teaches at the London School of Economics and Political Science, United Kingdom. His research interests include the philosophy and methodology of science, (critical) social theory, feminism and gender-studies, and the study of violence/war.