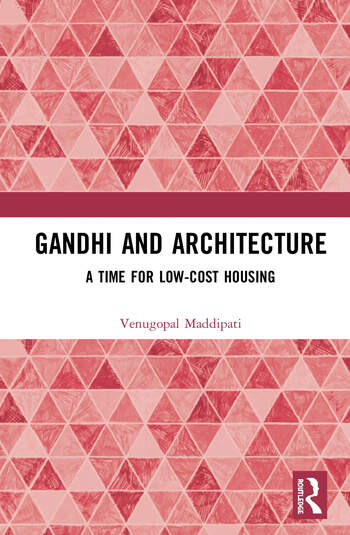 Gandhi and Architecture: A Time for Low-Cost Housing

Gandhi and Architecture: A Time for Low-Cost Housing chronicles the emergence of a low-cost, low-rise housing architecture that conforms to M.K. Gandhi’s religio-philosophical emphasis on the necessity of establishing limits in everyday actions. This book approaches the making of a ‘Gandhian low-cost housing architecture of finitude’ as an enduring present.

This volume is a critical intervention in the philosophy of architectural history. Drawing ecclectically from science and technology studies, political science, housing studies, urban studies and anthropology, this richly illustrated volume will be of great interest to students and researchers of architecture and design, housing, history, sociology, economics, Gandhian studies, urban studies and development studies.

List of Figures. Acknowledgements. Glossary. Introduction. 1. An Architecture of Finitude: Segaon, 1936—1937 2. The Present Endures: A Late-Colonial Gandhian Architecture for a Post-Colonial Age at the Low-cost Housing Exhibition of 1954 3. Urbanizing Finitude: For What Reason Must a Vernacular Architecture Die? Charles Correa, Gandhi, India: circa 1974–2006 4. The House that Necessity Built: Ecology, Economy, Customization and Architecture in the Global South; Wardha: 1978-1998 5. Regionalizing Finitude; "The Wardha House," Language, Identity and Environment in Wagdara: A Kolam Village 6. Afterword. Index.

Venugopal Maddipati is Assistant Professor in the School of Design at Ambedkar University Delhi, India. His research focuses on building as poesis, housing thinking, geological thinking, and ecological histories. His publications include of Water Histories of South Asia: The Materiality of Liquescence (coedited, 2019) and essays in journals and books, such as South Asia: Journal of South Asian Studies; Sarai Reader 09; Simon Starling/Superflex: Reprototypes, Triangulations and Road Tests; MARG; and LA, Journal of Landscape Architecture.

Gandhi and Architecture: A Time for Low-Cost Housing