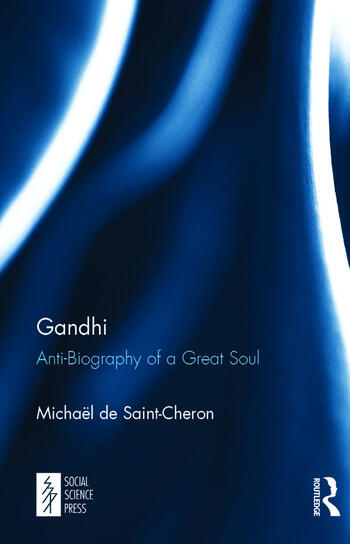 Gandhi: Anti-Biography of a Great Soul

This book is not just another biography of Gandhi. It is valuable because it offers us a French view--- and Jewish too perhaps---- of a man and times so familiar to us and yet which acquires another dimension as it is represented through another culture.

There are eloquent accounts in this book of philosophers like Ramakrishna and Vivekananda who influenced Gandhi’s thought and life. Rather than political events, Michaël de Saint-Chéron holds up the force and courage of a man who became a prophet in a blood-thirsty century.

Interestingly, the author points out that it is only India and the Middle East which has given the world the two mother religions of Hinduism and Judaism. Neither China nor Europe, two major cultures, have produced a world religion. The book is further enriched by a discussion on Hindu mysticism and the concept of ‘love’ in Judaism.

The author also looks at how Gandhi has played a major role on shaping French intellectuals such as Andre Malraux. At the end however, a central dilemma, and a painful one to the work, concerns Gandhi’s silence on the Holocaust.

This book will be of interest to scholars working on Gandhian studies, Indian philosophy and Judaism, and to readers of politics, ethics and history.

1. The Anti-Biography of a Great Soul

2. How Does One Make a Mohandas Gandhi?

6. The Path to Renunciation

7. Satyagraha in Deed and in Reality

10. Between Non-Violence and Anti-Zionism

11. India and Gandhi viewed by Romain Rolland and André Malraux

is the author of several books and specializes in Jewish Theology and the ties with Hinduism and Buddhism. He has taught at the Sorbonne and the Elie Wiesel University in Paris and in two Taiwan universities. His recent publications include Evil and Exile with Elie Wiesel, Notre Dame University Press, 2000 and Conversations with Emmanuel Levinas, Duquesne University Press, 2010.

Gandhi: Anti-Biography of a Great Soul