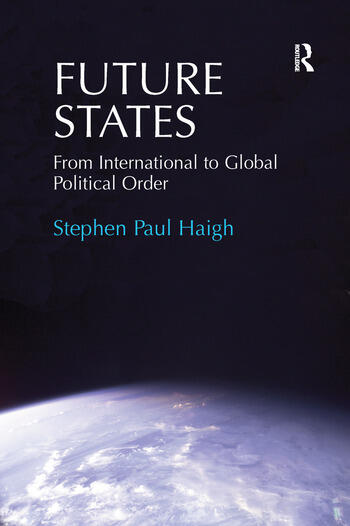 Globalization consists of an interlocking array of political, economic, social, and cultural forces that challenge the traditional international order in two key ways. First, states historically had 'hard shells', by means of which they were capable of consolidating differences between 'inside' and 'outside' to the point where the latter could more easily be quarantined. Second, for closely-related reasons they were largely able to 'absorb' domestic society, such that the individual was less a citizen than a subject. But through globalizing processes these (dubious) attributes have been starkly exposed, which leads Haigh to ask, Whither the state under globalization? Insightful and well-written, this book is sure to spark lively debate while attempting to answer its central question.

Stephen Paul Haigh received a Master's degree in Political Theory from the University of Calgary, Canada, and a PhD in International Relations from the University of Otago in New Zealand. In between, he worked as a policy analyst for the Government of Canada, culminating in international policy development on the UN Convention on Biological Diversity (UNCBD). He is currently living with his wife and children in Brisbane, Australia, where he has a small consulting business that addresses issues related to those in this book and where he lectures part-time on IR at the University of Queensland.

’This is an outstanding book that will greatly enhance discussions on globalization, denationalization and deterritorialization in the field of International Relations (IR) and beyond. Stephen Haigh provides an excellent and innovative analysis of sovereignty, statehood and cosmopolitanism that will be of interest both to philosophically-trained IR scholars and students. There is no doubt in my mind that his theoretical discussion of neo-medievalism and embedded cosmopolitanism� will spur a fresh debate among globalization theorists and normatively oriented scholars.’ Dirk Nabers, University of Kiel, Germany ’In this highly original study Stephen Haigh confronts the phenomena and theories of globalization head-on. Indeed, in arguing for the resilience, adaptability and centrality of what he terms transformed states he mounts a most formidable defence of IR - not by denying the profound economic changes that have taken place over the past twenty-five years, but by showing that only the state in its modern form can address the many problems thrown up by globalization. A great addition to the literature on globalization and a major contribution to IR as a discipline.’ Michael Cox, Founding Director, IDEAS, London School of Economics, UK ’"[G]lobalization is ushering in a neo-medieval age," argues Stephen Haigh in this ambitious reinterpretation of the development and trajectory of the Westphalian system, as a result of which the embedded cosmopolitan state becomes an institutional necessity�. To defend such a bold claim requires mastery of history, International Relations theory, and metatheory. It requires subtlety, clarity, and care. Not least, it requires infectious conviction. Haigh has it all. The result is a book as insightful, compelling, and creative as it is enjoyable to read.’ David A. Welch, Balsillie School of International Affairs, Canada 'Future States is an interesting addition to the globalization literature and to IR more broa