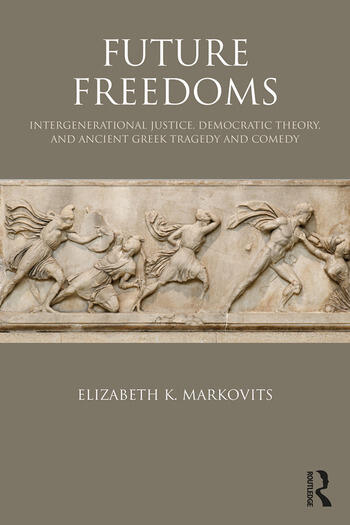 What do present generations owe the future? In Future Freedoms, Elizabeth Markovits asks readers to consider the fact that while democracy holds out the promise of freedom and autonomy, citizens are always bound by the decisions made by previous generations. Motivated by the contemporary political and theoretical landscape, Markovits examines the relationship between democratic citizenship and time by engaging ancient Greek tragedy and comedy. She reveals the ways in which democratic thought in the West has often hinged on ignoring intergenerational relationships and the obligations they create in favor of an emphasis on freedom as sovereignty. She claims that democratic citizens must develop a set of self-directed practices that better acknowledge citizens’ connections across time, cultivating a particular orientation toward themselves as part of much larger transgenerational assemblages. As celebrations and critiques of Athenian political identity, the ancient plays at the core of Future Freedoms remind readers that intergenerational questions strike at the heart of the democratic sensibility.

This invaluable book will be of interest to students, researchers, and scholars of political theory, the history of political thought, classics, and social and political philosophy.

3. Archê, Finitude, and Community in Aristophanes

6. Art, Space, and Possibilities for Intergenerational Justice in Our Time

Elizabeth K. Markovits is Associate Professor of Politics and Director of the Teaching & Learning Initiative at Mount Holyoke College. Her research interests range from ancient Greek thought to contemporary feminist and democratic theory. She is the author of The Politics of Sincerity: Frank Speech, Plato, and Democratic Judgment (PSUP, 2008). She has also published scholarly articles on Greek comedy and tragedy, rhetoric, and on women, carework, and democracy, as well as numerous op-eds.

'Future Freedoms is a unique and wonderful blending of political theory and the interpretation of literary and material texts. Markovits’s initial argument is that the reason modern Western theorists find it so difficult to think about intergenerational justice is because they are blinded by a pair of disabling fantasies: the fantasy of sovereignty (both individual and collective), and the fantasy of inevitable historical progress toward such sovereignty. The way out of this dead-end, Markovits argues, drawing on Arendt, is not by formulating yet another abstract analytic theory, but by focusing on stories or narratives that link past, present, and future in "untimely" and unsettling ways that challenge our imagination of who we are and what we should want as individuals and citizens. Her insightful readings of two types of such narratives, ancient Athenian drama and modern public art, mark out new paths for thinking not only about the meaning of intergenerational justice but of democratic politics as well.' - Stephen Salkever, Bryn Mawr College

'What kind of world will be left for future generations? Elizabeth K. Markovits’ Future Freedoms invites you to consider this question as a democratic one, drawing on a tradition of ancient and modern thought to envision how people can sustain democracy into the future. Lucid, imaginative, and cogent, this book is a necessary riposte to the de-democratizing forces dominant at the present moment as well as an exhortation to become the change you want to see.' - Joel Alden Schlosser, Bryn Mawr College