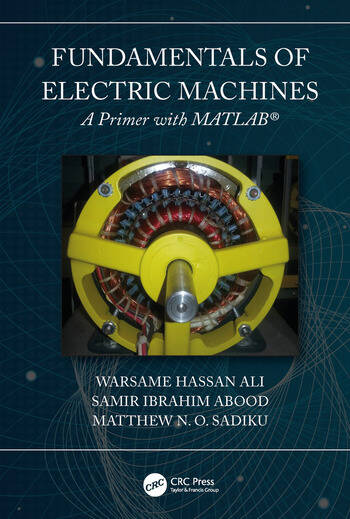 An electric machine is a device that converts mechanical energy into electrical energy or vice versa. It can take the form of an electric generator, electric motor, or transformer. Electric generators produce virtually all electric power we use all over the world. Electric machine blends the three major areas of electrical engineering: power, control and power electronics. This book presents the relation of power quantities for the machine as the current, voltage power flow, power losses, and efficiency. This book will provide a good understanding of the behavior and its drive, beginning with the study of salient features of electrical dc and ac machines.

Dr. Warsame H. Ali received his BSc from King Saud University Electrical
Engineering Department, Riyadh, Saudi Arabia, and his MS from Prairie View A
&M University, Prairie View, Texas. He received his Ph.D. in electrical
engineering from the University of Houston, Houston, Texas. Dr. Ali was
promoted to associate professor and tenured in 2010 and to the Full professor to
2017. As a faculty fellow, Dr. Ali joined NASA, Glenn Research Center, in the
Summer of 2005, and Texas Instruments (TI) in 2006.
Dr. Ali has given several invited talks and is also the author more than 100
research articles in major scientific journals and conferences. Dr. Ali has received
several awards from NSF, NAVSEA, AFRL, and DOE. At present, he is teaching
undergraduate and graduate courses in the Electrical and Computer Engineering
Department at Prairie View A & M University. His main research interests are the
application of digital PID Controllers, digital methods to electrical measurements,
and mixed-signal testing techniques, power systems, HVDC power transmission,
sustainable power and energy systems, power electronics and motor drives,
electric and hybrid vehicles, and control system.
Samir I. Abood received his BSc and MSc from the University of Technology,
Baghdad, Iraq in 1996 and 2001 respectively. From 1997 to 2001, he worked as
an engineer at the same university. From 2001 to 2003, he was an assistant
professor at the University of Baghdad and at AL-Nahrain University, and from
2003 to 2016. Mr. Abood was an assistant professor at Middle Technical
University / Baghdad – Iraq. Presently, he is doing his Ph.D. in an electrical
power system in the Electrical and Computer Engineering Department at Prairie
16
View A & M University. He is the author of 25 papers and 3 books. His main
research interests are in the area of sustainable power and energy system,
microgrid, power electronics, and motor drives, and control system.
Matthew O. Sadiku received his BSc in 1978 from Ahmadu Bello University,
Zaria, Nigeria, and his MSc and Ph.D. from Tennessee Technological
University was an assistant professor at Florida Atlantic University, where he
did graduate work in computer science. From 1988 to 2000, he was at Temple
University, Philadelphia, Pennsylvania, where he became a full professor. From
2000 to 2002, he worked with Lucent/ Avaya, Holmdel, New Jersey, as a
system engineer and with Boeing Satellite Systems as a senior scientist. At
present, he is a professor at Prairie View A & M University.