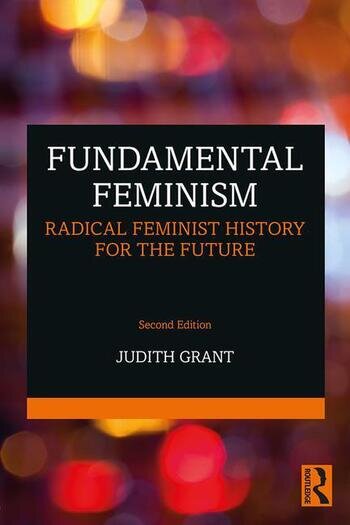 In this updated classic, Judith Grant provides a new introduction and postscript that frames her original work as part of a larger argument about the importance of structuralism in radical feminist ideas of patriarchy. Forewords by esteemed feminist theorists reintroduce the new edition to the latest generation of feminist students and scholars.

In Fundamental Feminism, Judith Grant explores the evolution of feminist theory in the context of today's feminist thought. In the original work, Grant analzyed three core concepts in feminist theory – "woman," "experience," and "personal politics" – from their origins in pamphlets and writings from the early women's liberation movement to their later constructions in feminist thought. In this second edition, she argues for the pivotal role of early radical feminism and the longstanding influence of these core assumptions on current theories including intersectional theory, queer theory structuralism and poststructuralism, and ongoing discussions about the sexuality debates of the 1980s.

Fundamental Feminism is provocative reading for anyone interested in the history and future of feminist theory and the power of feminist politics.

6. Solutions: A Basic Outline of the Issues and Some Suggestions

Judith Grant is professor of political science at Ohio University

"In this brave and astute reckoning with ideas central to feminist theory, Judith Grant demonstrates the importance of critical thinking to the continuing struggle for social justice." — Mary Hawkesworth, author of Embodied Power: Demystifying Disembodied Politics

"At a time when radical feminism has migrated so far from its beginnings, Judith Grant’s Fundamental Feminism is now, more than ever, a crucial book. Grant shows us why radical feminism was so generative ... and so problematic. A must-read for students of feminism!" — Alice Echols, Professor of History, University of Southern California.

"Judith Grant’s Fundamental Feminism celebrates diversity, though not as tick-box bureaucratic categories. Rather it conceives feminism as a diversity of activisms, struggles and confrontations, within which theories arise as praxis in relation to power. This is the way that I want my students to understand feminisms, and we will all welcome the updating contributions to the new edition." — Terrell Carver, Professor of Political Theory, University of Bristol, UK

"This new edition of Judith Grant’s trailblazing intervention provocatively recuperates feminist theory for, and works alongside, a feminist politics aimed at liberation from gender and other structures of domination. Grant’s stirring intellectual history extricates feminist theory from the "misogynist canon" of political thought while inciting contemporary feminist scholars to confront the value of our own "canonic" building blocks as tools of/for resistance in the present. In this post #MeToo era, Grant’s striking insights about the strategic deployment and limits of personal politics and experience- and the urgency of constituting feminist subjects in and through collective political action- are more vital than ever. Fundamental Feminism calls us back to the unremitting work of dismantling the world we cannot live within as we reconstitute the world we desire." — Alix Olson, Emory University

"Judith Grant shows us the value of cultivating our curiosity about earlier feminist conversations, rather than simply leaving them behind. She leads us through a partially forgotten set of arguments to advocate for a feminist path that moves beyond gender to a different vision of the human" — Kathy Ferguson, University of Hawai‘i at Manoa

"Judith Grant remains at the forefront of contemporary feminist theory thanks to her critical examination of feminism’s core concepts. In this updated version of her seminal 1993 text, Fundamental Feminism, she re-engages topics that are central to both feminist theory and feminist politics in the 21st century as she probes the latter’s ability to make real social change. Grant skillfully analyzes the evolution of feminist thought paying heed to the social, political, and intellectual contexts that have both enriched and impeded feminism’s influence. This re-issued version of her book rekindles conversations about the importance of feminism today, and is essential reading for anyone interested in 21st century sexual politics." — Mary Caputi, California State University, Long Beach