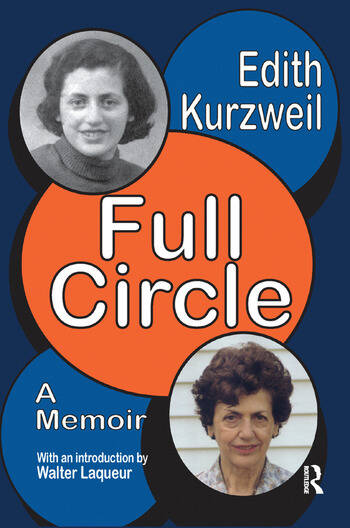 This is a personal history of the twentieth century as seen through the eyes of Edith Kurzweil, author, teacher, editor of Partisan Review, and a recent recipient of the National Medal of Humanities. The book opens with Kurzweil early adolescence in Vienna during the Nazi takeover. It ends with the author finding herself in the new century. In between, she kept moving on and interrogating the world around her.

The reader follows Kurzweil on her perilous journey, at the age of fourteen, to Belgium, through France, Spain, and Portugal, alone with her younger brother. Her fantasies of reunion with her parents in New York kept her going but came to naught: she had not expected to fall from a wealthy childhood into the life of the working-class poor, as a millinery apprentice or a diamond cutter. Instead of entering college life, she eventually became a conventional American housewife. Unhappy and anxious, she anticipated the social changes in America, and returned to Europe with her second husband and her two children. She arrived at the beginning of the Italian miracle--its post-war revitalization. In Milan she met many Americans as an active member of its community and of the British-American club. After personal tragedy she returned to New York, and only then pursued her early intellectual ambitions. The author eventually became a professor of sociology and quickly climbed up the academic ladder. Just as she had been as a little girl, she still "wanted to know everything," beginning with her study of Italian entrepreneurs and going on to European history and French thought, to psychoanalysis and anti-Semitism. Her early writings prompted William Phillips, co-founder and editor of Partisan Review, to invite her into the elite circle of New York intellectuals. She worked alongside him, first as a reader, then as executive editor, and took over the editorship of the legendary journal during its final period.

Kurzweil's journey was one of courage, and of emotional and intellectual growth. Full Circle will be of interest to intellectual and cultural historians, literary and Holocaust scholars, and American studies specialists.