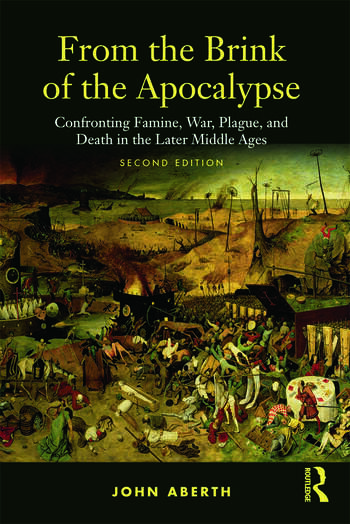 From the Brink of the Apocalypse: Confronting Famine, War, Plague and Death in the Later Middle Ages

"Aberth wears his very considerable and up-to-date scholarship lightly and his study of a series of complex and somber calamites is made remarkably vivid." -- Barrie Dobson, Honorary Professor of History, University of York

The later Middle Ages was a period of unparalleled chaos and misery -in the form of war, famine, plague, and death. At times it must have seemed like the end of the world was truly at hand. And yet, as John Aberth reveals in this lively work, late medieval Europeans' cultural assumptions uniquely equipped them to face up postively to the huge problems that they faced.

Relying on rich literary, historical and material sources, the book brings this period and its beliefs and attitudes vividly to life. Taking his themes from the Four Horsemen of the Apocalypse, John Aberth describes how the lives of ordinary people were transformed by a series of crises, including the Great Famine, the Black Death and the Hundred Years War. Yet he also shows how prayers, chronicles, poetry, and especially commemorative art reveal an optimistic people, whose belief in the apocalypse somehow gave them the ability to transcend the woes they faced on this earth.

This second edition is brought fully up to date with recent scholarship, and the scope of the book is broadened to include many more examples from mainland Europe. The new edition features fully revised sections on famine, war, and plague, as well as a new epitaph. The book draws some bold new conclusions and raises important questions, which will be fascinating reading for all students and general readers with an interest in medieval history.

From the Brink of the Apocalypse: Confronting Famine, War, Plague and Death in the Later Middle Ages