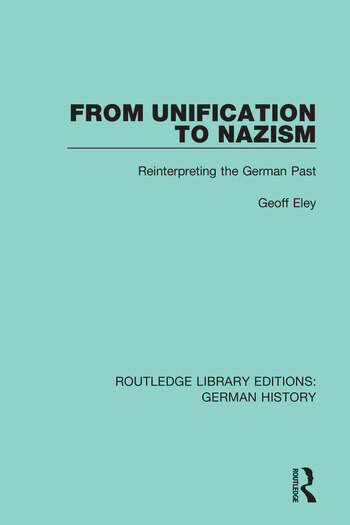 From Unification to Nazism: Reinterpreting the German Past

Originally published in 1986, and bringing together essays written over a 10 year period, this volume offers a coherent and challenging interpretation of the German past. The book argues that the German Empire between 1971 and 1914 may have enjoyed greater stability and cohesion than is often assumed. It suggests that Imperial Germany’s political institutions showed considerable flexibility and capacity for growth and puts forward the idea that without WWI, or in the event of a German victory, the Empire might well have demonstrated its viability as a modern state. In that case, the origins of fascism should be sought mainly in the subsequent experiences of war, revolution and economic crisis and not so much in the Empire’s so-called structural backwardness.

Part 1: German Historical Writing 1. Hans Rosenberg and the Great Depression of 1873-96: Politics and Economics in Recent German Historiography, 1960-80 2. Capitalism and the Wilhelmine State: Industrial Growth and Political Backwardness, 1890-1918 Part 2: The Social Foundations of the Kaisserreich 3. State Formation, Nationalism and Political Culture: Some Thoughts on the Unification of Germany 4. Army, State and Civil Society: Revisiting the Problem of German Militarism 5. Sammlungspolitik, Social Imperialism and the Navy law of 1898 6. Social Imperialism in Germany: Reformist Synthesis or Reactionary Sleight of Hand? Part 3: Enemies of the Reich 7. Joining Two Histories: The SPD and the German Working Class, 1860-1914 8. German Politics and Polish Nationality: the Dialectic of Nation-Forming in East Prussia Part 4: The Origins of Nazism 9. The German Right, 1860-1945: How it Changed 10. What Produces Fascism: Pre-Industrial Traditions or a Crisis of the Capital State?

From Unification to Nazism: Reinterpreting the German Past