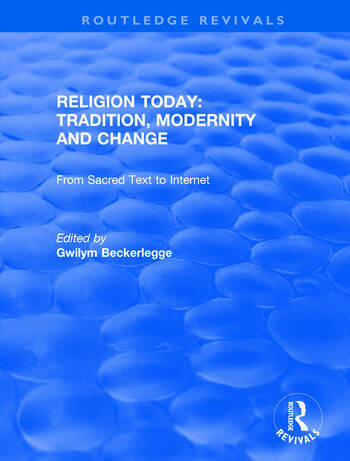 From Sacred Text to Internet: Volume 1

This title was first published in 2001: From Sacred Text to Internet addresses two key issues affecting the global spread of religion: first, the impact of new media on the ways in which religious traditions present their messages, and second, the global relocation of religions in novel geographical and social settings. The book offers extended studies of Buddhism, Christianity, Hinduism and a wide-ranging survey chapter that refers to the presence on the Internet of many of the world's most influential religions. The chapters explore the relationship between scholarly reconstructions of the life of Jesus and representations of Jesus in contemporary popular cultures; the production and use of sacred images for the Hindu mass market; how Buddhism is represented and spread in the West; the Islamization of Egypt, its causes and influences; and the uses to which the Internet is put by religions as well as how information technology has influenced the future shape of religion. The five textbooks and Reader that make up the Religion Today Open University/Ashgate series are: o From Sacred Text to Internet o Religion and Social Transformations o Perspectives on Civil Religion o Global Religious Movements in Regional Context o Belief Beyond Boundaries o Religion Today: A Reader

'... serves as good introduction to how various forms of media are utilized in specific contemporary religious cultures. Because of its clear organization and a helpful glossary accompanying each chapter it could serve as a useful textbook and teaching tool in survey or honours level religious or media studies classes.' Reviews in Religion and Theology 'Designed as an under-graduate textbook (...) From Sacred Text to Internet takes a fascinating look at a variety of ways in which different religious traditions are using 'new media' - which means, in practice, everything from television to the Internet to a wide range of popular folk art... Instructors ought to find this a very useful text for under-graduate courses in religious history, sociology of religion, sacred texts and narratives, as well as the various 'Religion and Popular Culture' courses. One particular useful feature for under-graduates is the glossary... a valuable contribution to the growing list of under-graduate Religious Studies resources' Journal of Contemporary Religion 'Nicely produced and not too expensive. Reflects UK authors whom students have heard about. Good level of detail and illustrations and clear font' Sophie Gilliat-Ray, Cardiff Research Fellow, Department of Religious and Theological Studies, Cardiff University, UK '... students and teacher of contemporary religion looking for scholarly yet accessible material that takes account of, but is not entirely dominated by, electronic media, should find this volume most helpful.' British Journal of Religious Education

From Sacred Text to Internet: Volume 1