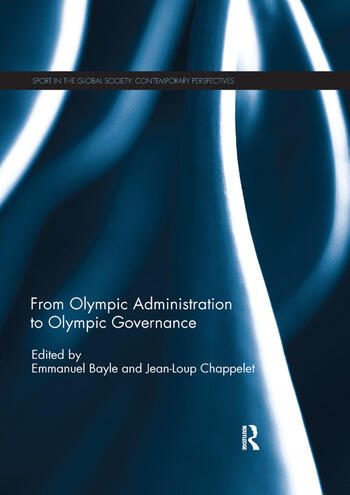 From Olympic Administration to Olympic Governance

Lausanne, the Swiss city IOC (International Olympic Committee) President Juan Antonio Samaranch honored with the title "Olympic capital" in 1994, is now the administrative capital of world sport. The past century has presented Olympism with many challenges and that continues to be the case today; the issues may have changed, but they are no less numerous. Controversies over phony amateurism, the two Chinas and the creation of a modern Olympia have been resolved, only to be replaced by questions of governance, compliance, strategy, responsible management, the size of the Games, the scarcity of bids and new forms of doping and corruption. All these themes are examined in the articles that make up this book published about 100 years after the establishment of the IOC’s headquarters in Lausanne. This book was originally published as a special edition of Sport in Society.

1. From Olympic administration to Olympic governance: challenges for our century Jean-Loup Chappelet and Emmanuel Bayle

3. Olympic social responsibility: a challenge for the future Emmanuel Bayle

5. The management of big games: an introduction Richard W. Pound

6. The governance of the Olympic Games in Canada Milena M. Parent

8. From the Olympic dream to a down to earth approach: Lausanne’s sports events hosting strategy Joël Pinson

10. Which governance for which organization? A postface Jean-Loup Chappelet

Jean-Loup Chappelet, PhD, is a full professor of public management at the Swiss Graduate School of Public Administration (IDHEAP) of the University of Lausanne, Switzerland. He was IDHEAP Dean from 2003 to 2012.

, PHD in management sciences, is professor of sport management at the Sport Science Institute (ISSUL) of the University of Lausanne, Switzerland. He is responsible for the master in sport and leisure management.

From Olympic Administration to Olympic Governance