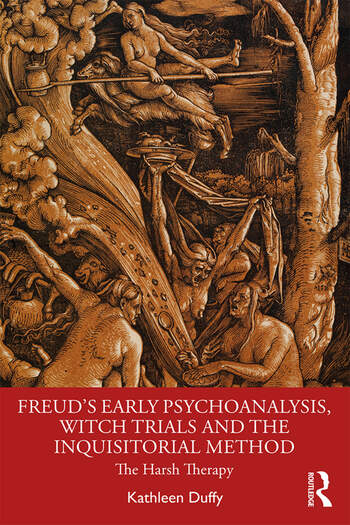 In Freud’s Early Psychoanalysis, Witch Trials and the Inquisitorial Method: The Harsh Therapy, author Kathleen Duffy asks why Freud compared his ‘hysterical’ patients to the accused women in the witch trials, and his ‘psychoanalytical’ treatment to the inquisitorial method of their judges. He wrote in 1897 to Wilhelm Fliess: ‘I ... understand the harsh therapy of the witches’ judges’. This book proves that Freud’s view of his method as inquisitorial was both serious and accurate.

In this multidisciplinary and in-depth examination, Duffy demonstrates that Freud carefully studied the witch trial literature to develop the supposed parallels between his patients and the witches and between his own psychoanalytic method and the judges’ inquisitorial extraction of ‘confessions’, by torture if necessary. She examines in meticulous detail both the witch trial literature that Freud studied and his own case studies, papers, letters and other writings. She shows that the various stages of his developing early psychoanalytic method, from the 'Katharina' case of 1893, through the so-called seduction theory of 1896 and its retraction, to the 'Dora' case of 1900, were indeed in many respects inquisitorial and invalidated his patients’ experience.

This book demonstrates with devastating effect the destructive consequences of Freud’s nineteenth-century inquisitorial practice. This raises the question about the extent to which his mature practice and psychoanalysis and psychotherapy today, despite great achievements, remain at times inquisitorial and consequently untrustworthy. This book will therefore be invaluable not only to academics, practitioners and students of psychoanalysis, psychotherapy, literature, history and cultural studies, but also to those seeking professional psychoanalytic or psychotherapeutic help.

Chapter 1. An analysis of the idea of devils, witches and evil

Chapter 2. The judges and inquisitors in the witch trials

Chapter 6. Why did Freud abandon his seduction theory?

Appendix 1. Charcot demonstrates the physical symptoms of hysteria in one of his patients

Kathleen Duffy graduated with a PhD from Regent’s University, School of Psychotherapy and Psychology, London, and until her retirement, was a consultant psychotherapist and was training and supervising junior psychiatrists within the Mental Health Services in Ireland. Her first career was as a head teacher in Ireland.

'A very interesting, cross-disciplinary book containing valuable material and with considerable original findings. The analysis of the development of Freud’s thought and the disturbing implications of his change of mind regarding the seduction theory are particularly well made. Connections are clearly made, for example, that Freud continued, at times, to use harsh therapy on the basis of the influence of his study of the witch trials. The book is well written and is a pleasure to read'. – Professor Mary Grey, author, ecofeminist liberation theologian; professor emeritus University of Wales, Lampeter; professorial research fellow at St. Mary’s University, Twickenham, London, UK

'Whereas Jung looked for historical analogies in Renaissance alchemy, Freud found his parallels in witchcraft trials. So persuasively argues this stunning book by Kathleen Duffy. Deftly written, deeply researched and provocatively argued, Freud's Early Psychoanalysis reveals a contradictory and gendered history of sexuality, demonology and the imagination. Were Freud’s early hysteria patients the victims of child abuse or of their fantasies? Were witches devil worshippers and enthusiasts for orgiastic rituals or dupes their own erotic longings? The harsh therapy is Freud’s term for the inquisitorial method of examining suspected witches; one he both overtly and covertly adopted. This important work of psychosexual history is a must for all therapists, historians of medicine, gender theorists, theologians, psychoanalysts, clinicians and students. Duffy’s meticulous and daring scholarship is essential reading for all those who care about how power is both stimulated and repressed within human desire'. – Susan Rowland, PhD, is author of nine books on Jung, gender and the arts, her most recent being Jungian Literary Criticism: the Essential Guide (2019). Founding Chair of the International Association for Jungian Studies, she is co-Chair of MA Engaged Humanities and the Creative Life and faculty on the Jungian and Archetypal Studies PhD programs at Pacifica Graduate Institute. She is working on Jung and Arts-Based Research, USA

'This is the most exciting – and thought-provoking – book in the field of psychoanalysis/-therapy I have read for many years: Kathleen Duffy underpins her initially almost unbelievable and shocking claim that Freud, in creating psychoanalysis, took sustained inspiration from the inquisitorial methods of the witch trials – the worst sustained excesses of violence against women in Western history – with a wealth of solidly researched historical evidence. Considering that all forms of psychotherapy are derived and/ or influenced by Freud’s work, Duffy’s controversial work not only challenges conventional academic perspectives on psychoanalysis and its origins, but also urges clinicians of all modalities to seriously re-think the way we view and interact with the people we work with – and also with our colleagues. With the currently increasing awareness of the abuse of women in patriarchal society, the publication of this book could not possibly be more timely'. – Dr Gottfried M. Heuer, psychoanalyst, independent scholar, author of Freud’s ‘Outstanding’ Colleague/Jung’s ‘Twin Brother’: The Suppressed Psychoanalytic and Political Significance of Otto Gross, UK

'In this carefully researched and well-written book, Kathleen Duffy lays out a deeply convincing and very disturbing argument that Freud’s study of the witch trials and their underlying assumptions affected his thinking about women and hysteria in a profound way. First, it caused him to develop a more sceptical attitude towards the memories of his female patients, and second, it undergirded his shift from his original theory of hysteria — that it was caused by child sexual abuse — to his later theory that it was the consequence of his patients’ fantasies or ‘wish fulfilment’. The early history of psychoanalysis still affects our clinical thinking and this book makes an important contribution to clarifying many central assumptions. It is a vital contribution to our work with female patients in contemporary psychoanalytic settings'. – Polly Young-Eisendrath, PhD; Jungian Psychoanalytic Association; Clinical Associate Professor of Psychiatry, University of Vermont, USA; Past President Vermont Association for Psychoanalytic Studies, USA; author of Love Between Equals and Women and Desire