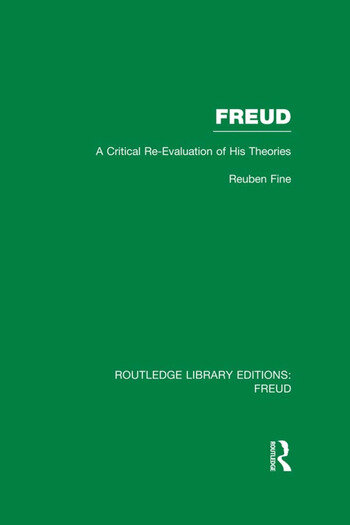 Freud (RLE: Freud): A Critical Re-evaluation of his Theories

In this book, originally published in 1963, Dr Fine sets out to describe what Freud said, and to re-evaluate his views critically in the light of the best knowledge of the time.

Freud’s numerous changes of view, his constant searching for the truth wherever it might lead him, as well as his resolute adherence to certain hard-won positions once he had achieved them, are all skilfully traced. Freud’s intellectual Odyssey is divided into four periods. From 1886 to 1895 he was a neurologist investigating hysteria and other ‘nervous’ disorders. Then came his self-analysis, from 1896 to 1899, the real matrix from which psycho-analysis grew. The first psycho-analytic system of psychology was developed in the period from 1900 to 1914. The remainder of his life, from 1914 to 1939, was devoted to the elaboration of ego psychology, and heart of contemporary psycho-analysis.

Dr Fine undertook, in writing this book, the formidable task of examining the whole body of Freud’s thought, to clarify what he said, and to review his ideas critically in the light of the best available existing knowledge. As he says ‘In this process of criticism I have tried to specify which aspects of Freud have stood the test of time and which have not.’

‘So far as I can see no one has ever before taken the trouble to ask: "What did Freud actually say? How does what Freud said stand up in terms of what we now know?"’

In answering these questions, Dr Fine develops a major thesis that all modern psycho-analysis derives from Freud, though it has moved far in many different directions. The contention is that emphasis on schools is misleading and has obscured the actual historical growth of the science.

As he states in his Preface to this volume, Dr Fine’s conviction is: ‘By building on Freud’s fundamental insights, we can move on most readily to empirical research and thus construct a more satisfactory science of psychology.’

Freud (RLE: Freud): A Critical Re-evaluation of his Theories