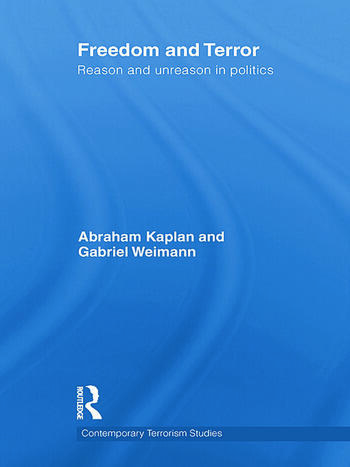 Freedom and Terror: Reason and Unreason in Politics

This book examines reason and unreason in the legal and political responses to terrorism.

Terrorism is often perceived as sheer madness, unreasonable use of extreme violence and senseless, futile political action. These assertions are challenged by this book. Combining ‘traditional’ thought (by Kaplan) on reason and unreason in terrorism with empirical explorations of post-modern terrorism and its use of communication platforms (by Weimann) the work uses interdisciplinary and cross disciplinary dimensions  to provide a multidimensional picture of critical issues in current politics and a deeper examination of their implications than previously available.

The book looks at various aspects of modern politics, from terrorism to protest, from decision-making to political discourse, applying the perspective of philosophical thought. To do so, political issues and actions are examined by using concepts such as reason, emotions, madness, magic, morality, absolutism, extremism, psychopathology, rationality and others. The analysis is rooted in theories and concepts derived from history, philosophy, religion, art, sociology, psychology, and political science.

This book, which was mostly written by the late Abraham Kaplan, an American philosopher, and edited and updated by Gabriel Weimann, will be of much interest to students of political violence/terrorism, philosophy, war and conflict studies and political science in general.

Introduction.  Foreword Carl Cohen  1. The Age of Madness  2. Knowledge and Political Action  3.Politics, Law and Behavioral Sciences  4. Historical Interpretation  5. The Politics of Protest  6. The Ethics of Terror  7. The Psychodynamics of Terror  8. The Theater of Terror: Modern Terrorism and the Mass Media  9. Moral Responsibilities and Political Realities  10. The Ethics of Power  11. The Politics of Prejudice  12. In Defense of Freedom  13. The Limits of Reason

Abraham Kaplan (1918-1993) was a leading American philosopher and author of six books.

Freedom and Terror: Reason and Unreason in Politics